Today, a colleague and I visited Randolph High School in Randolph, NJ. Humanities supervisor Jonathan Olsen was kind enough to give us a tour and plan an awesome day of learning about the way Randolph has implemented BYOD and other technology initiatives. I had planned on writing a blog post summarizing all I had learned, but when I did my prewriting, I realized that I had WAY too much to say! Ergo, this has turned into part 1 of a two-part series about the trip.

The purpose of our visit was to get some perspective and learn about the technology that Randolph uses as part of their daily instruction routine. We were not looking for shiny new bells and whistles; we wanted to see how they use technology as a tool for learning.

My district does not currently provide open wifi for students, though my desperate hope is that it’s in the long-term plans. In the meantime, it looks like we’ll be investing in Chromebooks to provide 1:1 access to students. We were interested in hearing Jon’s thoughts about BYOD as it compares to 1:1, and he was a great resource for us.

RTHS is currently in its second year of BYOD implementation. Jon noted that it’s the way to go, considering the huge investment on hardware districts need to make for 1:1 access. He noted that BYOD saves time and energy spent on teaching kids to use school devices and allows them to tap into the power of what’s in their pocket every day.

I was fortunate to be there on a day when superintendent Dr. David Browne was speaking to a number of other superintendents from the area, and it was great to hear his insights. My favorite quote from Dr. Brown was that the BYOD rollout is “not an event. It’s a process.” He emphasized the fact that it’s important to remain patient and supportive, especially with reluctant stakeholders. He did, however, also remark that while he knows some people are hesitant, the fact of the matter is that they’re moving forward with the initiative. To be proactive about addressing concerns, the district created a BYOD FAQ section on their web site. They even created a space in their LMS for parents to register their child’s device, so if it’s found in the hallways, there is a way to find out whose it is. Dr. Browne noted that some teachers are still resistant, and there has been a learning curve. However, the initiative has been successful and is gaining momentum this year.

Since I know you’re wondering, yes, the district does provide devices for students without access at home. They were able to purchase about 150 Nooks to sign out to students without devices.

When my colleague and I arrived at RTHS, we were able to access the guest wifi. Jon was eager for us to try it, as he was unsure about how non-district devices would work on the guest network. I must say, the entire process was quick and easy, and I loved some of the security measures they had in place.

The network prompted me to put in my name, phone number, and email address, but what I liked even better was the fact that I was required to agree to the Acceptable Use Policy (AUP) before I gained access to the network. This served as a visible reminder that I was on school grounds using the school network, and I had to abide by school rules. Additionally, once I was signed on, my browser took me to the RTHS home page. That was one more reminder that I was on their turf. Not that I’m naïve enough to think for a second that no kid ever will try messing around on the network, but I felt that it was a proactive way to reinforce digital literacy in school. And besides, they’re more than likely doing that now anyway.

I loved that they don’t allow anonymous use.

There were three options for accessing the network, depending on the user.

The user is able to read the AUP in its totality before agreeing.

The Randolph name and AUP were front and center as I signed in.

The part of our visit that took me by surprise the most was learning about classroom design and rethinking learning spaces. Honestly, I think I came home more excited about the furniture than the technology! My mind is swimming with ways to redesign my classroom, and I’m hoping to be one of two pilot 21st century classrooms in my building. I was impressed by Apple TV and the ceiling-mounted projectors (fingers crossed that those will happen for us this summer!), but really what got me the most was the furniture.

I have to start with my favorite: Node Chairs. These things are crazy amazing. There are a variety of options when shopping for Nodes, but I’d be hesitant to bother with them if we didn’t get the work surface attached (I suppose we could forego the cupholders if we HAVE to). Having tripped over backpacks more times than I can count over the last nine years, I’m also a fan of the ones with the slots for backpacks underneath the seats. The chairs rotate 360 degrees and are on wheels. Admittedly, Node Chairs would require a paradigm shift and a teacher to be comfortable with controlled chaos. There would be no “set way” that the classroom is arranged. Teachers and students would have the freedom and flexibility to move the furniture to suit their needs for each activity. I was sold as soon as I saw them, but when I walked by a group of kids using them in the hallway, I became obsessed. At over $450 a pop, they’re not cheap. But I must have them! Looks like I need to get some practice at writing grants! 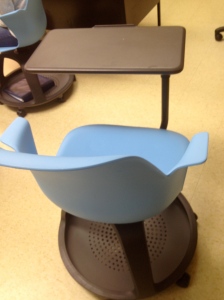 So. Obsessed. WIth. These. Desks.

Another cool design feature I saw was this group of triangular desks. I loved that the desks could easily break apart and be put back together for discussion. They were small enough to be portable but large enough to have the space you’d need for class. I also really liked how they curved inward; they were quite ergonomically designed! If I had my druthers, I’d still prefer the Node Chairs, but I understand that not everyone gets their druthers in public education! This could be a cool alternative (though I’ll still push for the Nodes). 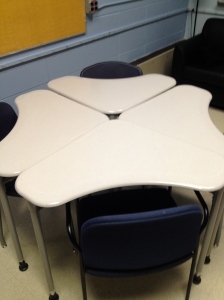 These triangular desks were awesome for small groups.

Probably the coolest of all the rooms at RTHS is the collaborative classroom, or A123. You may think the photos below are of an office or college classroom, but you’d think wrong. This space is a high school classroom with some of the coolest design features I’ve seen. There are a few large white desks (from Steel Case) spread throughout the room (granted, the space is HUGE, so they could fit a lot). At each desk, there is a hidden compartment that contains these puck-like things that hold retractible VGA cords that attach to a rather large monitor at the end of the table. Students can easily come in, plug into the VGA, and project their device on the screen. Additionally, the projector in the front of the room can mirror on the monitors, so if a kid is in the back of the classroom, he doesn’t have to strain his neck and/or eyes to see one central screen. The whole thing was pretty unbelievable. I loved what Dr. Browne said about the space when he observed that at first, the teachers tried to develop lessons to fit the classroom, but now the classroom inspires the lessons. Such an amazing opportunity for Randolph students. 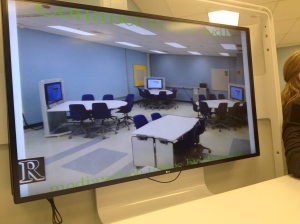 Each station can project its own laptop. It’s amazing.

The presenter area of the collaborative classroom

Inside each table are pucks that hold VGA wires so anyone can project.

A final element relating to classroom design is the overhead projectors with Apple TV attached. Having ceiling-mounted projectors is a fantastic way to free up space and allow for even more movement around the room. Basically, Apple TV is a little transponder that mirrors your device (audio and video) through the projector. This way, instead of a teacher tripping over wires and being bound to a projector cart dealing with multiple dongles (I speak from experience here), she could walk around, iPad in hand, and display relevant pages and visual aids on the board. And the best part? Each Apple TV is only a hundred bucks! It uses the wireless network to send the signals, so in a district where there is no guest network, only district-approved devices could mirror content.

The wires and everything are housed in the ceiling. The black box is Apple TV.

Jon was able to access all the Apple TVs from his iPad.

I have more to write, but that will come later. Tune in over the next couple days for part 2 of my tech dreams, in which I discuss the role of educational coaches in this initiative, as well as a bunch of cool apps and web tools! Feel free to leave ideas, questions, or suggestions in the comments!