Today was a good day, albeit much shorter than I imagined. Here is my sleep pattern for last night:

8:00-8:30pm- fight passing out because it was too early to fall asleep. Fail miserably at goal, slipping into deep, sweaty slumber.
1:15am- wake up and get frustrated that I couldn’t fall back asleep. Spend next few hours texting and blogging.
4:30am- get in bed, set alarm for 10am. Pray that I can sleep until 8 at least.
6am- wake up again. Get very annoyed. Force self to go back to sleep. Cross fingers that it’ll last till 8.
Ummmmm this is embarrassing, but 2:30pm! Wake up. Look at iPad. Note that it says 2:30pm. Stare in disbelief. Go to google. Search “what time is it in Mallorca?”. Learn from google that iPad was correct. I SLEPT UNTIL 2:30 IN THE AFTERNOON.

After settling down and realizing that it doesn’t matter because I have over a month left to explore Palma, I decided to make myself “breakfast.” I think it still counts as breakfast since it was only like 8:30am at home. I was so glad I bought a few groceries yesterday, and there was some instant coffee in the cabinet here at the apartment, so I was all set. I made eggs and toast, and I had some yogurt to go with it. At first I was bummed because I realized that the yogurt said “yogur sabor Macedonia.” I thought Macedonia was Greece, and I don’t like Greek yogurt. Upon googling, I learned that Macedonia is Spanish for fruit salad! So it was regular yogurt, just fruit salad flavor. And it was so yummy! I ate on the balcony; here’s the view!

Oh, they don’t refrigerate eggs here. I was scared to buy non-refrigerated eggs, but if you haven’t noticed, this trip is all about conquering fear. So I did it, and they were tasty! The only thing is that I forgot to buy butter, so my toast was dry and my eggs stuck to the pan. There are worse things in life.

After my desayuno, I got some schoolwork done. I made a calendar for the reading and assignments for my first class, and I did some of the reading that’s due tomorrow. I was pleased to learn that I found the reading interesting! Even though the whole principal thing doesn’t appeal to me, learning about leadership in general does. I don’t think I had ever thought of leadership as a thing that can be taught or researched. It’s cool. Also, it poured this afternoon, so I didn’t feel too bad about sleeping through my planned beach day. Here’s a shot of the clouds and rain!

I finally got around to getting ready for orientation, which was scheduled for 7pm. I left at 6 or so because I didn’t actually have any idea where I was going. Luckily, my landlord Javier had pointed out where it was the day before (literally…he pointed from the balcony and was like “it’s over there.”). So I did my best to figure out where to go, and eventually I saw it! The Bellver International College! That’s where I’ll be taking my classes. It was only 6:20, so I headed back to a tapas place I had passed while looking for the school. I didn’t know if they’d have food at orientation (turns out they had pizza and champagne!), so I wanted to eat. Plus I knew it’d give me a chance to practice my Spanish.

I did ok, but I still get extremely nervous when I don’t understand someone. Today there were a man and a woman working in the restaurant. The man spoke too fast for me, but the woman was really patient and spoke slowly. I ordered meatballs (albondigas) and chicken with curry (pollo con curry) from the tapas menu. I also ordered a cerveza, but when she brought it over, she pointed to it and said “la caña.” She walked away, but I called her over said said “tengo una pregunta” (I have a question), and then I asked (in Spanish) if, in Spain, la caña was the correct term for beer instead of cerveza. I think she told me that it depends, but both are ok. She said something about what you call it when you put lemon or sprite in your beer. I didn’t understand everything she said, but I was still proud for initiating the conversation and understanding plenty.

Of course, no dinner recap would be complete without photographic evidence of my meal! 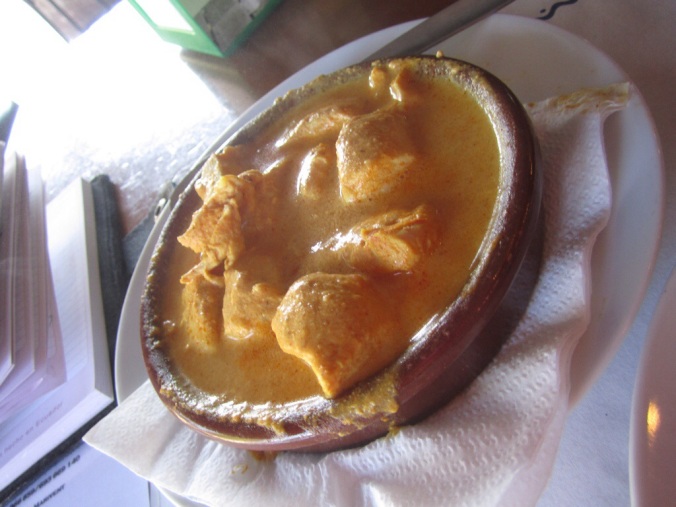 Albondigas en salsa (the English translation on the menu was “meetballs.” Very cute):

Once I finished my delicious tapas, I headed over to orientation, and I was right on time. They had sooooo many pizzas…so many, in fact, that lots of people (including me) took home whole pies! Here’s a pic of the leftovers! 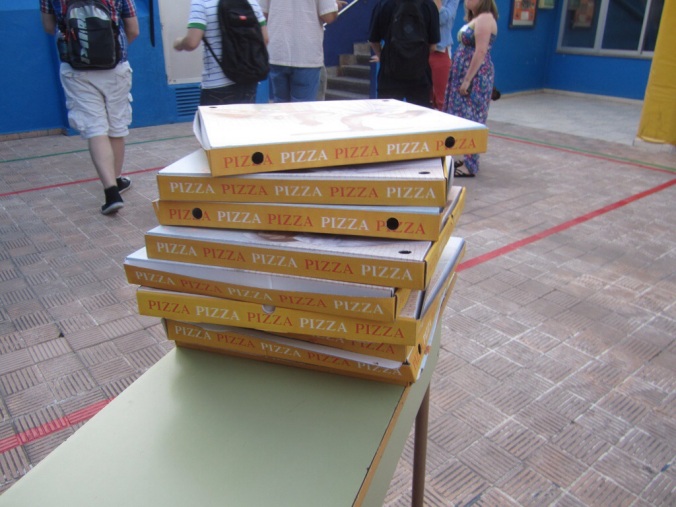 I really enjoyed orientation; it made me much less nervous for school to start, and it also made me pretty hell-bent on getting myself a job in an international school like yesterday. That will definitely be high on my life list for the very near future (sorry Mom!).

When I first arrived at orientation, everyone was already engrossed in conversations, so I just sort of walked awkwardly around for a while. Then, after some quiet self talk, I forced myself to go up to a group and ask if I could join them. They were very friendly and all originally from the USA or Canada, so language was not a barrier. Two of them currently teach in Tokyo, and the third in Florence. It was really cool to hear their stories and get to know them.

The director of the program got our attention, did some intros, and ran some icebreakers. It was a great way to get people to interact and get to know each other. I definitely think it takes a certain type of person to do something like this, so it was easy to find things in common. Despite the fact that I’m still quite nervous, I know I made the right decision in coming.

I stayed until the program director kicked us out (classic me), and then I tackled the daunting task of finding my way home. After one wrong turn and more than one creepy alleyway, I emerged victorious and found my apartment! I enjoyed the view for a while (the sun was still shining at 9:15pm), took some selfies (I’m here alone; don’t judge me), and started writing this post. Now I am going to get in my pjs, set the alarm, and finish my first reading assignments for tomorrow. Wish me luck that I’ll actually be able to sleep tonight! I need to be back at school by 8:05am, so I need to catch some Zzzzzzzzzs! ¡Buenos noches!

Here are some photos from around 9:15pm tonight! 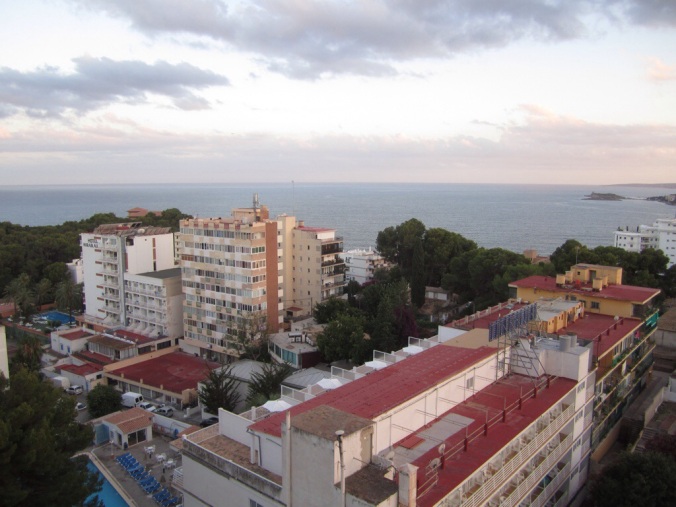