This will be another semi-uneventful post, as the week itself was rather uneventful. Don’t get me wrong; I’m still having an amazing time. But now it’s sort of to the point where I feel like I live here, so every meal isn’t the exciting outing that it once was. With that being said, I will still never tire of this view no matter how many times I see it: 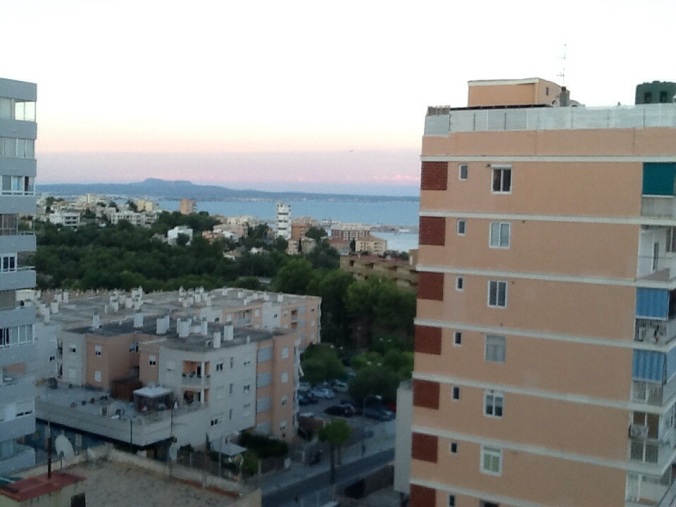 The end of the week was pretty busy; my final project (a curriculum analysis) was due on Friday, and I was up late Thursday night finishing it (no all-nighter this time, though! Woo hoo!). I stayed at school on Thursday after class because I wanted to use a real computer to do my tables and graphs for my project (I am surviving with just the iPad this year, but a laptop would be handy). When I sat down in front of the computer all ready to do my work, I was surprised by the realization that I actually had no idea how to analyze the data I wanted to analyze. I wanted to look at English scores for students at my school, based on home towns. I stared at the data table for a while and finally gave up and admitted that I lacked the knowledge to do that sort of analysis. I ended up being pleased with my project nonetheless and am glad I didn’t overthink it too much. I have been learning this summer that I tend to overthink and overdo things, so I’ve been working on stepping back a bit. I think that’s why I didn’t have to do another all-nighter. Yay.

After I finished at the computer lab, I went with a few friends (Erin, Molly, Derrick) for pizza at Casa de la Abuela (that was the name of the restaurant; I don’t know any grandmothers here, nor do I know where their houses are). The pizza was delish, but there was one snafu. Our purpose in going there was to get pizza for our class lunch on Friday (I was class rep and therefore responsible for organizing lunch). As it turns out, they were closed for lunch, so I couldn’t get the lunch that I had promised my class. Derrick had the genius idea of ordering a bunch of bocadillos (sandwiches) and pastries from the local coffee shop, so that’s what we decided to do. It actually worked out really well; we had the bocadillos, chips, sangria, and pastries, and we gave our professor Penny a t-shirt that we personalized with #data. The story behind the #data thing is too long to type, but trust me, it was funny, and the shirt/card combo made her cry! I had accidentally left the marker we used to make the shirt in the bag, so we all ended up signing it for her. It was an all-around successful last day, I’d say! 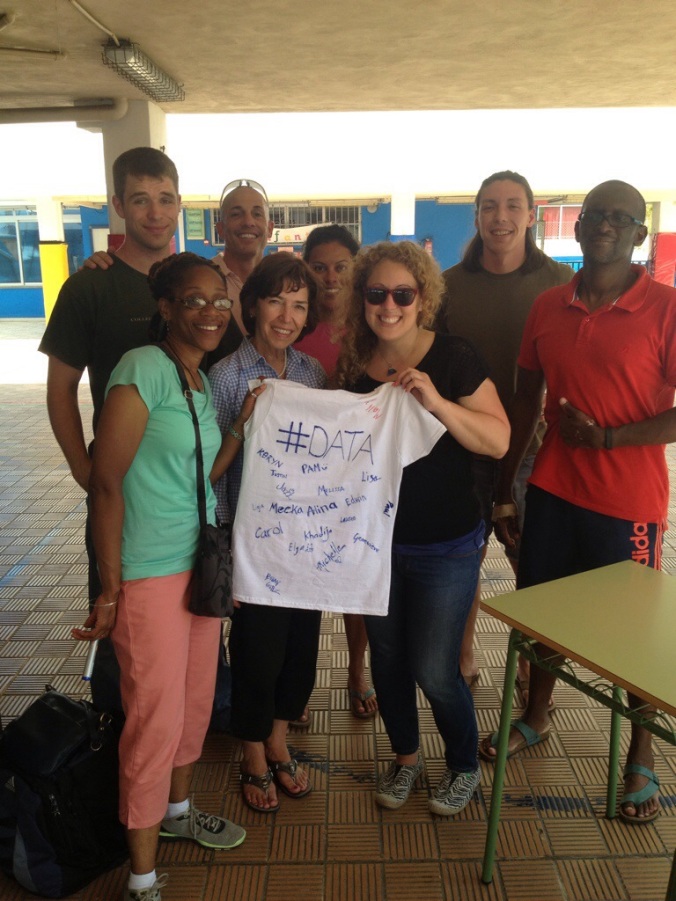 After class, Ligia and I had our traditional Friday beach outing, this time with Molly and a few others. It was a good time, and we swam out to the buoy again. I have been enjoying the swimming; it’s a great workout, and the water here is super warm. It’s also nice that there’s basically no riptide, even though the water has been slightly choppy. I feel safer swimming out farther here than I would at home. I’m also wondering why I don’t swim much at home in the summer. Lame. When I get back, I want to be sure I get myself to the beach a couple times a week!

Our beach outing was followed by a trip to the Pelicano for a gathering organized by the folks at TCNJ. We were able to see Penny one last time, which I enjoyed because I was able to thank her for a great two sessions. I really have learned a lot from her, and I will stay in touch. She’s been super encouraging and has helped me see myself and the whole idea of ed leadership in a different light. I’m inspired! Here’s a group shot of some great folks from class, plus, of course, Penny. 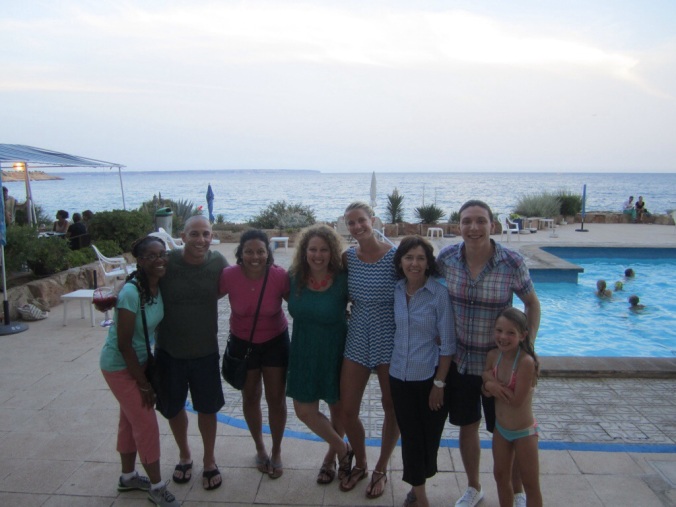 Another fun part of the evening was getting to spend time with Erin, my friend from Biotech. I mentioned in another post that Erin is the one who told me about the TCNJ Mallorca program, which was awesome of her because I’m so glad I’m here! I mean, the Spain part is obvious, but I also love the classes and am doing well, which is great. I’ve wanted to be back in school for quite some time, and this is the perfect way to do it. So thanks, Erin!

Here we are enjoying the lovely view from the Pelicano. 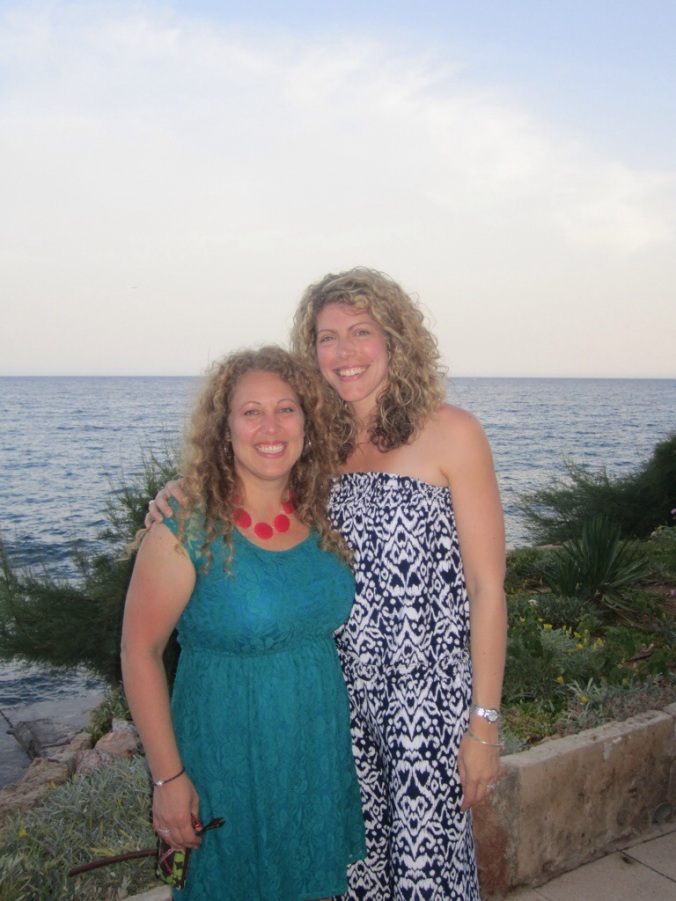 The Pelicano party was over at 8:30, so from there we headed back to Istanbul and got kebabs (I really like those kebabs), and then we went to a place called the Cowboy Bar. It used to be a really popular bar for American Navy guys when they’d come to port in Mallorca, but they don’t come here anymore, so now the owner (an oldish British gentleman) doesn’t get much business. They only stay open on Fridays and Saturdays. I loved it, though. The second I walked in, I felt like I was back in America. There was a pool table and tons of great American music, and those neon Coors Light signs up all over (don’t worry, though, I didn’t have any Coors Light). Lots of people from school were there, and it was fun to hang out and unwind after a long week.

I didn’t do too much for the rest of the weekend; yesterday was a day for lounging around and catching up on sleep. Erin and I went grocery shopping and bought way too much stuff (we shopped hungry…never a good decision). Then Derrick, Molly, Erin, and I went for burgers at Charlotte (still another one of my favorite places). Derrick and Molly went out, but Erin and I just grabbed some ice cream and headed home to watch a movie. After some regional copyright issues from Amazon, we ended up renting Fargo from iTunes. Have you ever seen Fargo? It was the first time for both of us. That movie is CRAZY! I can definitely see why it got so many accolades, though.

Today was productive as far as school is concerned; I spent some time downloading all the files I need for my supervision class, which starts tomorrow. I did the reading for tomorrow, which was a breeze compared to my last two classes. It felt good to have it done early and then just enjoy the rest of the day. Erin and I went to the beach and then the orientation for the third session at Bellver College (the TCNJ Mallorca site). Then we came home and relaxed for the rest of the evening. I FaceTimed my mom, who is in Florida, which means I got to see my Aunt Laney, too, which was a bonus. Mom said she was looking for my next blog post, so I figured I’d write one to make her happy! And that takes me to about here, which I suppose means I’m done! Only 12 days to go- I can’t believe how fast this time is flying by! Wish me luck in my third and final class of the summer!

And here are some recent pictures of my kitty friends. They make me miss Ender and Bean! 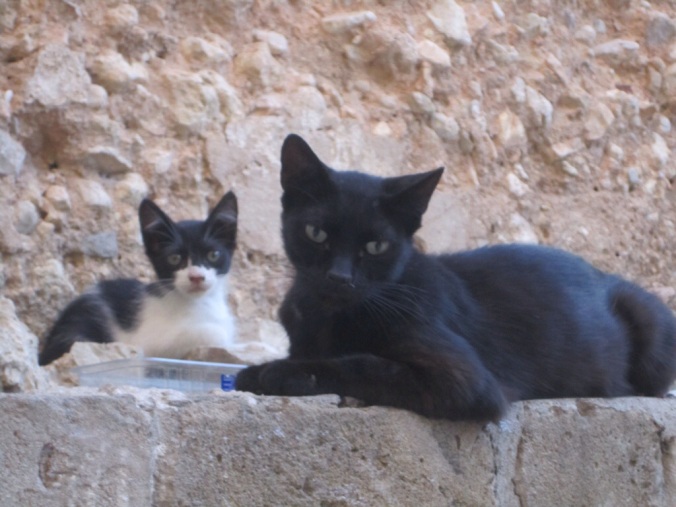