¡Buenas! It was so weird typing the date and realizing that it’s November 15, and I got a bit of a sunburn today. I’m still getting used to the fact that the weather here will just always be pretty amazing.

But anyway, that’s besides the point. I still want to write my Gringolandia post (I have my brainstorming done in my phone for that one already), but I need to wait a bit and write about today’s adventure first! Fue un buen día indeed.

This week, Amanda, Rebecca, and I decided to go on an adventure. Last week, we spent most of the weekend at Gringolandia, which was pretty much perfect for must-needed down time. However, as this fin de semana approached, we still didn’t have plans (and Amanda and I both had to work on Saturday), so we figured we may as well try to escape the concrete jungle for a while.

The plan was to hop on a bus to the closest beach (Jaco [pronounced “ha-co”]) in the morning and come back in the afternoon. But, you know what they say about the best laid plans…

To save my time writing and your time reading, I think I’ll present this story in captain’s log format.

We departed from Gringolandia for Terminal Coca-Cola (the bus station that the internet told us had buses to Jaco) at 8:30 (the bus was scheduled for 9). It was a little bit stressful at first because taxis were few and far between. Fortunately, our friend pulled up at the compound to pick up another friend, and their cab driver called another cab driver for us (this sentence is wordy, but I’m leaving it). We told him our destination, and he took us there pretty quickly. Our initial worry about missing the bus was alleviated…for a hot second, at least.

8:45 – search for ticket booth at Coca-Cola terminal. Ask stranger (en español) where we can buy tickets. Stranger points out a mercado. We walk to mercado. Ask woman in booth for three tickets to Jaco. Woman tells us that there are no buses to Jaco at this terminal. Tensions rise. Woman gives us directions (en español) to other terminal, which is the one from which the Jaco buses depart.

8:50 – frantically jump in a cab to get to terminal 7-10. Creepy cab driver explains that it’s quicker and easier for him to just drive us to Jaco. He says he will charge us 15,o00 colones (about $30) each. We try to politely decline because we are sure we will make the bus. He insists that he MUST drive us. We continue to decline. He pulls up to the bus station and tells us he will wait for us to see if we can find tickets. We told him thanks but no thanks. Amanda pays him 2,000 colones, even though the trip was basically around the block. It should have cost 645. He refuses to give us change. We learn a valuable lesson about insisting that cab drivers turn on the meter when we get in the car.

8:50-8:55 – ask numerous strangers (en español) where to buy tickets to Jaco. Slowly find our way to ticket booth (I still don’t understand why you can only buy certain tickets at certain booths, but I guess that’s just how it is). We celebrate the fact that we made it on time. We ask for three tickets for the 9:00 bus to Jaco, and we are told that the 9:00 bus is full, and we have to wait until 11. We do not want to wait till 11. We learn a valuable lesson about booking bus tickets in advance.

9 something (really who could be keeping track of specific times during such chaotic times??) – arrive at Thrifty. Wave to man at Thrifty who is always working and who is super patient with me always. Approach other man working at Thrifty. Explain, “No tenemos una reservacion, pero tiene carros para hoy?” (We don’t have a reservation, but do you have cars for today?). Here’s how that interaction went down:

10:00 or so – We try to leave the lot, but I needed to take a moment to compose myself and remember how the heck to drive a stick shift. I put it into first, but when I released the clutch, the car just kept going backwards. A Thrifty guy jumped out of the car next to me and asked, politely (yet with the appropriate amount of concern, “can I help you?”). Here’s the rest of that convo:

To be honest I don’t remember what he said in response to that, but somehow or other, we made it out of the parking lot without stalling or hitting anyone/anything. I felt a million eyes on us, and I’m sure the brains that were attached to the eyes were thinking, “who the heck let that dumb gringa get behind the wheel??”

But finally, we were on our way, and driving a stick actually wasn’t that hard at all! The hills were still a little scary, but, as with most frightening experiences lately, once we got through it, all was well.

The rest of the ride to Jaco was pretty uneventful and enjoyable. We loved seeing the mountains and scenery (I don’t have pictures because duh, I was driving, and I don’t use my phone when I drive a stick shift up and down mountains in a foreign country!). Once we were out of the city, I felt so much more relaxed (thank you and sorry again to Amanda and Rebecca for their unending patience with me behind the wheel). It was a great drive.

This post is already over 1,600 words, so I’m going to breeze through the Jaco update quickly. We had some lunch at a taqueria and then sat down, read books, chatted, swam, and soaked up the sun. We forgot to take a group selfie (that’s so unlike us!), but here are some photos of the beach. It’s not the most beautiful beach in all of Costa Rica, but it was absolutely perfect for what we wanted. Just sitting there finishing up the Amy Poehler book (well, I’m at 94%…it’ll be done tonight) and listening to the waves was totally worth it (vale la pena [that’s my favorite Spanish phrase, by the way]). 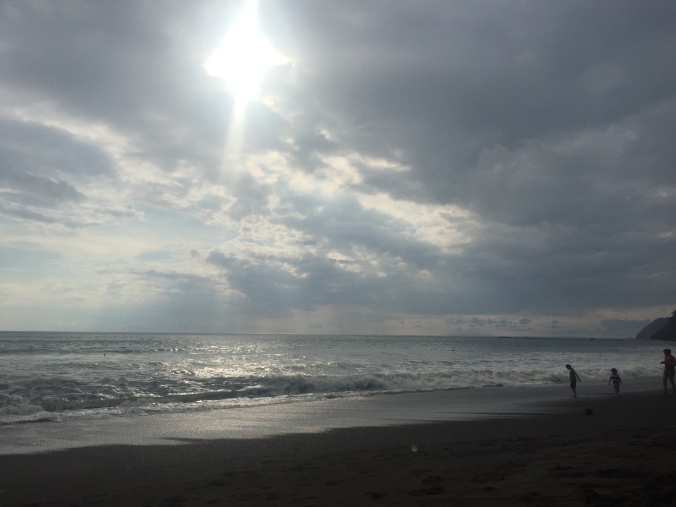 I loved the sparkles on the waves

It was a little cloudy today.

I’m still not used to having trees at the beach. But I like it.

I guess I was enjoying myself. Photocredz to Amanda.

Not a bad view. 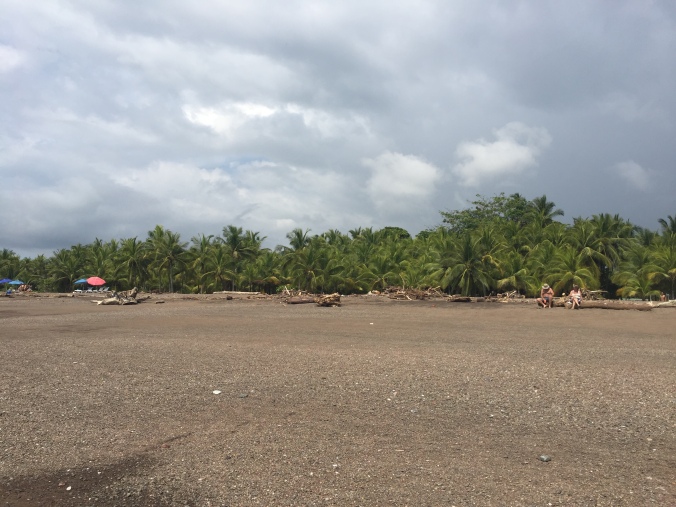 Taken from the water. 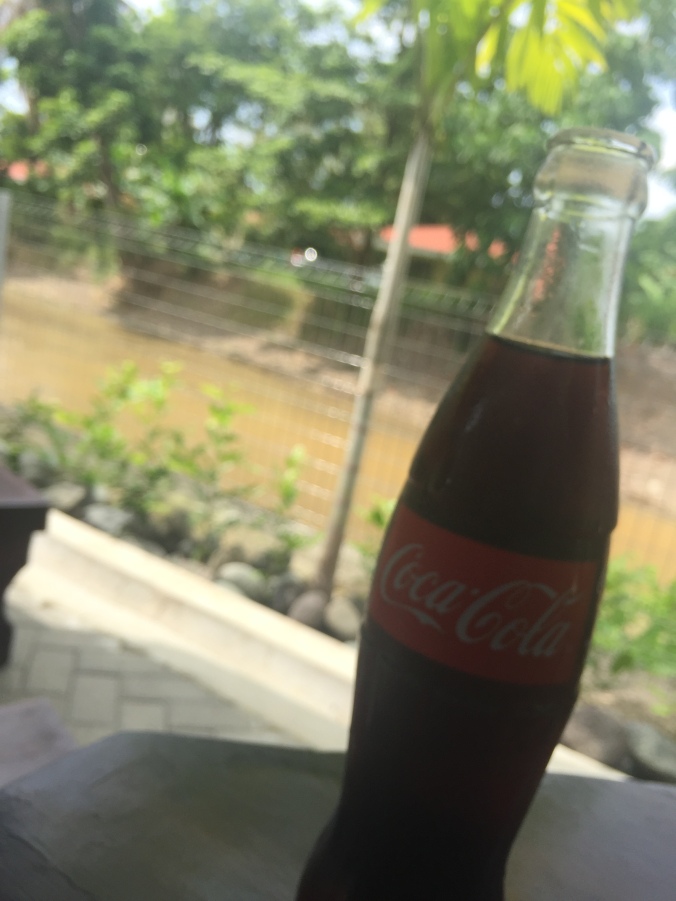 I was trying to be artsy with my Coke bottle at lunch. Side note, the Coke tastes better here.

Our first view of the beach (even though it’s the last pic. They posted in reverse chronological order for some weird reason)

3:30 – We headed on out, congratulating ourselves for how much time we had to get back to Thrifty. *universe says “muahahaha” again*

3:30-7:30 – Crazy traffic that I don’t have the energy to write about, but trust me, it was insane! Let’s just say I feel pretty bad for the clutch of our poor little rent-a-car because it got a LOT of use tonight!

Because we missed the 6pm closing time for the Thrify in El Centro, we had to return the car to their airport location. That too was an adventure, considering the fact that there was a brand-new mall that apparently the entire world visited this weekend, and traffic there was at a standstill.

I won’t bore you with the details, but we finally found the Thrifty (which is next to a Denny’s, which is my favorite twitter and you should check it out) and returned the car. Luckily I had the receipts from the change of return date for the car, because New Guy apparently never updated my reservation in the system. Note to self: figure out how to get onto bank account (my account is locked out again) and make sure the charges are correct.

The Thrifty guys called us a cab, and luckily there was no traffic on the way back to Gringolandia. I enjoyed the cab ride because I chatted with the cab driver en español the whole way home. He told me that my Spanish was good, and at one point I said something that he said made me sound like a tica! (Thank you, Chelsea, for teaching me that the rain is “como pelo de gato”!) I think all the Spanish I was forced to speak today helped me get over my fear of sounding dumb, so I felt really comfortable chatting (charlando) with him.

Well, our adventure pretty much ends here (except for a funny thing that happened to me and Amanda when we went to dinner, but I won’t write that here because I am ashamed to admit where we went). I am home now and almost ready for bed. I think it’s pretty safe to say that I will sleep well tonight!

If you have read all 2,100 words of this ridiculously long post, give yourself a gold star. I am too tired to proofread, so many apologies for typos, grammar errors, redundancy, or that thing I sometimes do where all my sentences sound super short and choppy.

Thanks one last time to Amanda and Rebecca for a fun and memorable day!