Apparently I really WAS tired last night as I was passing out while writing my blog. I ended up sleeping more than 11 hours! I feel a bit groggy still, but overall I’m refreshed. That’s probably a good thing because I have a presentation and two papers due this week, so it’ll be pretty busy yet again. I have heard from others who have been here in the past that the professor I have for the first two classes is the most rigorous. Word on the street is that it’ll calm down a bit after this.

Ok, back to catching up. On Wednesday I started my second class, called Curriculum Theory and Practice. It’s a good class and I’m learning a lot, but I did like the first class better. Nothing against the people in curriculum, but in my leadership class, there were 12 of us, and we all got along really well pretty much from the first day. I feel like it was a very special dynamic. Everyone in the curriculum class is really nice, but there are 22 of us, so it’s more difficult to click with everyone as quickly as we did in Intro to Admin. I love that they take class pictures for all the classes; that means I can show everyone to you! Here’s my Intro to Admin class, including our professor Penny, who I love. 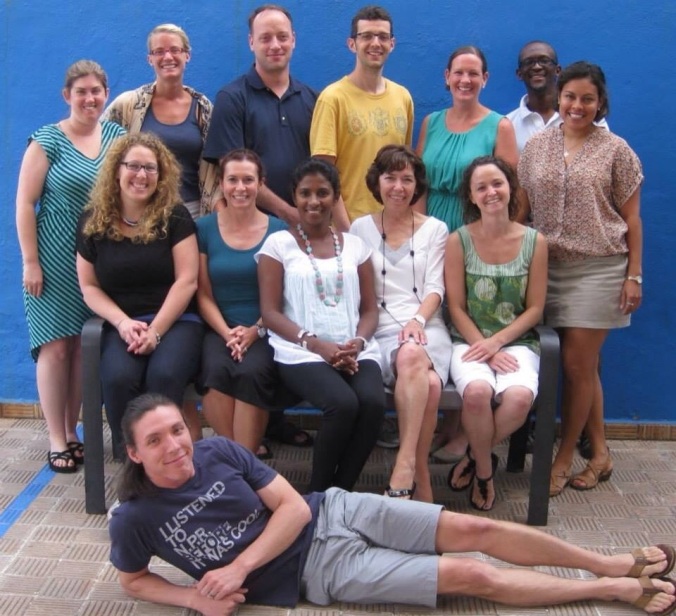 After class on Wednesday, I decided to FINALLY find the grocery store. I had been to little mercados, but I was determined to find the one at Porto Pi, which everyone claimed was such an easy walk (this was the one I was looking for when I went up the hill instead of down it and got completely lost in that beautiful neighborhood). Since my awesome parents had shown me the way on Sunday (when the mall was closed) I was able to get there lickety-split this time. I brought my little shopping cart that my mom got for me. 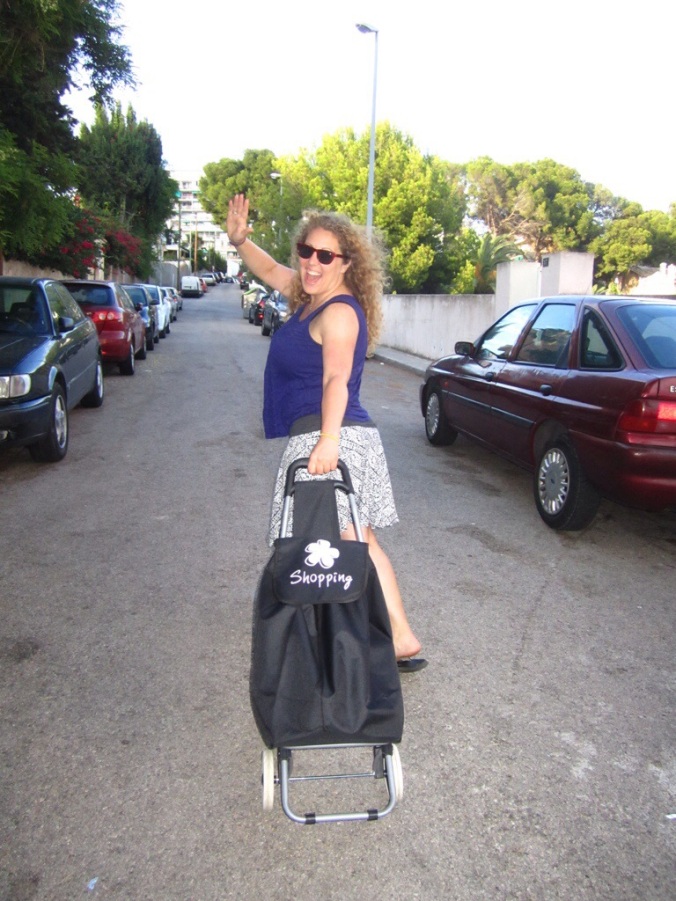 The shopping itself was fine; I was able to find pretty much everything I was looking for. I even stumbled upon things I didn’t expect, like an entire section filled with huge chunks of pig, complete with hooves. 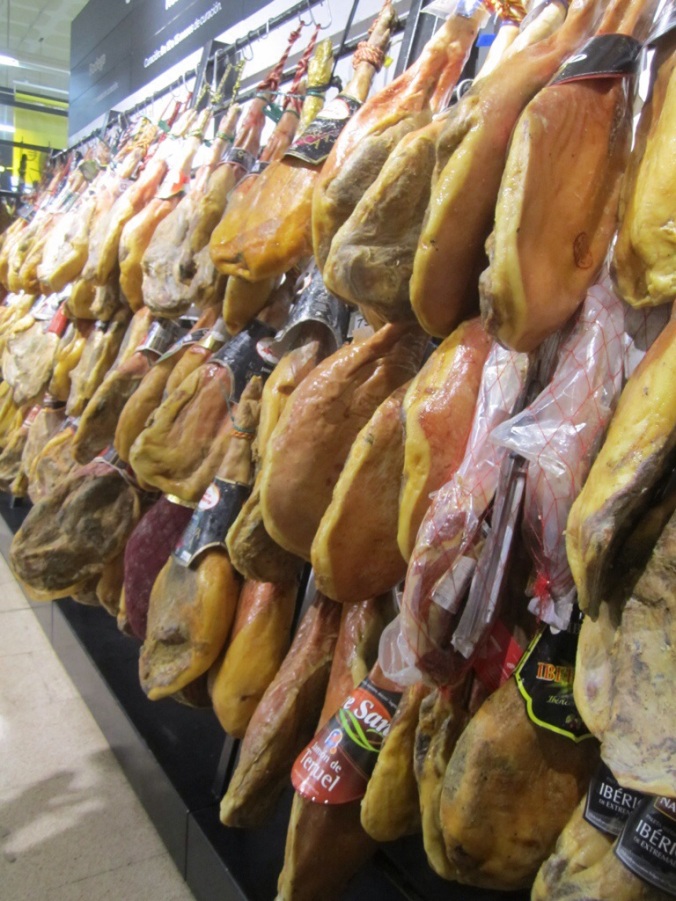 In the grocery store (called Carrefour, which actually is more like a Target combined with an A&P, not just a grocery store), they have a whole international section (much bigger than our international aisle). I had one of those “oh so this is how people view Americans” moments when I noticed that most of the sections had legit food (grains, spices, sauces, beans, etc.) and the American section was pretty much the land of sugar. They had boxes of cake mix, icing, jelly beans, cookies, and other junk food. I didn’t see much actual, substantive food. I didn’t take a picture because there were many people around and I felt silly doing it, but I was definitely struck by what is perceived as “American” food. However, I have to admit that I don’t even know what I’d put in that aisle instead. We definitely are a sugar-obsessed nation.

And if I’m being honest, I must admit that I did buy a pack of Peperidge Farm cookies…mostly just to feel connected to home, not just because they’re delicious and amazing, obviously.

Even though my mom warned me that I have to weigh my own fruit and veggies before checking out, I didn’t see the scale, so I skipped that step. This led to disaster. The checkout girl tried to tell me that I need to weigh them, but she spoke so fast and with an accent (or maybe she was speaking Catalan?) that I couldn’t understand her. I just kept hearing her say “words words words frutas words words veduras words words” with a piercing glare on her face. I just kept saying “lo siento, no comprendo” over and over. The trembling and sweating returned as my confidence with Spanish once again was shattered. She called over another Carrefour employee and had her go weigh my produce. I stood there awkwardly and waited until she came back, paid for my groceries, and walked out of the store feeling defeated. I came so close to getting McDonald’s for some comfort food, which was right outside Carrefour, but I didn’t let myself. I came home and made dinner for myself, which I ate on the balcony looking at my amazing view. I felt better after that.

Thursday was another whirlwind, filled mostly with schoolwork. I had a group project to work on after class, so from 1:30-4, we stayed at school and wrote a group paper. I was pleased with how it came out. The case study project we were doing also includes an individual writeup (2 pages), so I came home and got pretty much right to work on that. Oh, in between school and homework, I tidied up the apartment a bit because one of my friends moved in! She had another place, but there were some issues that resulted in a quick evacuation, so she and her mom are staying here. It’s been fun to have the company. Speaking of company, I’m extremely excited for my friend and colleague Erin to arrive tomorrow; she is the one who told me about this program, about which I will be forever grateful.

I spent entirely too much time working on my paper, but I just couldn’t find a second article to analyze! I was frustrated because I didn’t think I had a very obscure topic; I was writing about teacher involvement in the curriculum development process. Finally, after a few hours of infuriating searching, I settled on an article about a research study in Nigeria. It was pretty interesting to read about their curriculum. I thought it was a bit amusing that the same nonsense happens all over the world. The researcher in the article I read said that 95% of teachers in Nigeria think teachers should be involved in the curriculum development process (well duh), but only 38% actually are. And not surprisingly, only 22% of teachers actually implement the national curriculum mandated by the government (most likely because teachers don’t have a say). I could relate a lot to the thinking behind it; as a leader, it’s never good to mandate anything so close to teacher practice like curriculum. People naturally get resentful for not being involved.

Yet I digress. I finished my paper, did the rest of my reading, and went to bed around midnight.

Friday was an excellent day. School again in the morning (we have class every day from 8:30-1:30), followed by some group work to prepare for our presentation on Monday. I came home around 3 and found my new roomie (Molly) and some friends hanging out and eating guacamole, made fresh that day from Molly’s mom. It was quite amazing and just what I needed after being pretty tired and somewhat cranky from the long week. I got the recipe for the guac and am excited to try it.

We hung out for an hour or so, and then we split up for a while. I had beach plans with Ligia, so I met up with her at 4:30 or so. It was such a perfect beach day; we were in the water for at least an hour. The Mediterranean is REALLY salty. It dries out my skin and puckers my lips, but it’s fun because it’s so easy to float! I’m glad I’ve been swimming so much.

Our beach trip was one of conquering fears. I don’t think I never noticed how often my first reaction to new experiences is one of fear. Ligia was like, “let’s swim out to touch that buoy out there, and I was all, “no way, it’s too far!” Later she suggested that we go ask the girl walking the tightrope on the beach if we could try, and my first reaction was “no, I can’t do that.” In both instances, I ended up agreeing, and I had a great time swimming way farther out than I should have and “walking” on the tightrope. Looking back, it seems silly that I was resistant to do either. Conquer your fears, people! Here are some pics: 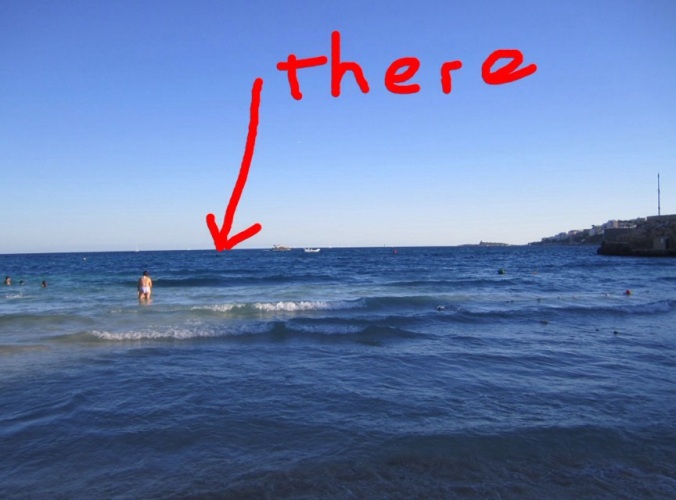 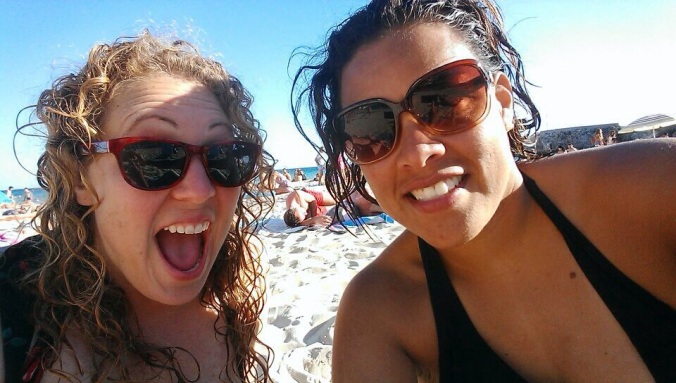 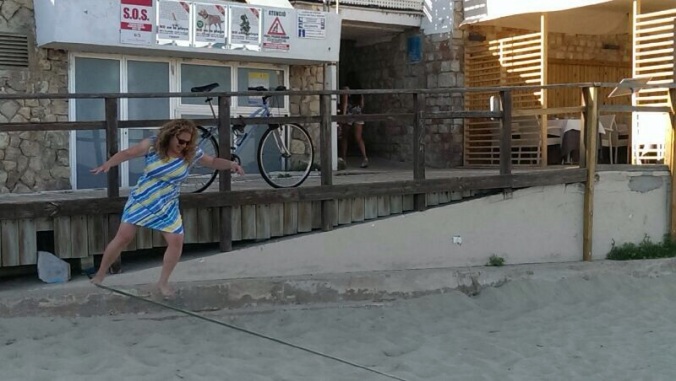 Yeah, so I fell off the tightrope. So what? It was still fun trying!

After our lovely beach day, we went for kebabs at Istanbul and then to karaoke. The school had announced a gathering at the local karaoke place, so we figured why not. There weren’t many people when we arrived, but we stayed anyway. People started showing up around 10:30 or 11. Like I said in my last post, this is becoming more and more like the true college experience! I can’t remember the last time I was someplace where the night didn’t start until 11:00pm. I stayed until about 12:30 and finally had to call it a night. I did sing (Lisa Loeb “Stay,” my favorite song), and I apologize to anyone who was there while that happened. It was really fun, though; everyone just pretty much sang along to everything. It was a great way to unwind after a long week of homework. I was especially entertained by the poor transcription of the “Ice, Ice Baby” lyrics, which said “check out my hook while Deeshay revolves it.” Who is this Deeshay person, and why is she revolving it?

Saturday was yet another adventure! I went on another bus trip with school, this time to the beach. Our first stop was a town called Cala Figuera. It was a beautiful street with a bunch of little shops and restaurants. Plus this view: 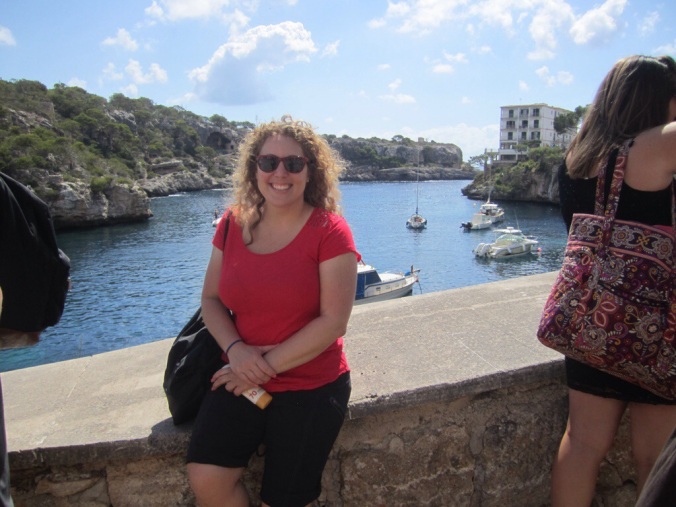 I went for lunch with a friend and her professor (he’ll be my professor next year, so it was fun to get to know him). He teaches school law and is showing My Cousin Vinnie tomorrow after class. My kind of teacher! I had a pizza Mallorca for lunch (pizza with eggplant, zucchini, and peppers). It was delish, as most pizzas have been here thus far.

After lunch we went to take a look at the cliffs (some people jumped off these cliffs, but not me!). They were quite gorgeous, and I think I could have stayed there staring at the water all day.

We then headed to Cala Mandrago, my favorite place from this trip thus far. It’s a national park and pretty remote beach, although it was pretty crowded on the sand. Luckily, I hung out with people who wanted to find somewhere more isolated, and we walked through some trails until we found a quiet little cove for swimming. The rocks were jagged and a bit painful when you put your hands or feet on them, but we survived. It really was an amazing afternoon. We stayed for almost two hours swimming, jumping off cliffs into the water (I have a picture of my jump but am not posting it due to obvious I-don’t-post-pics-of-me-in-a-bathing-suit-on-the-internet personal guidelines), and relaxing in caves. It was a pretty perfect afternoon- one of my favorites yet. 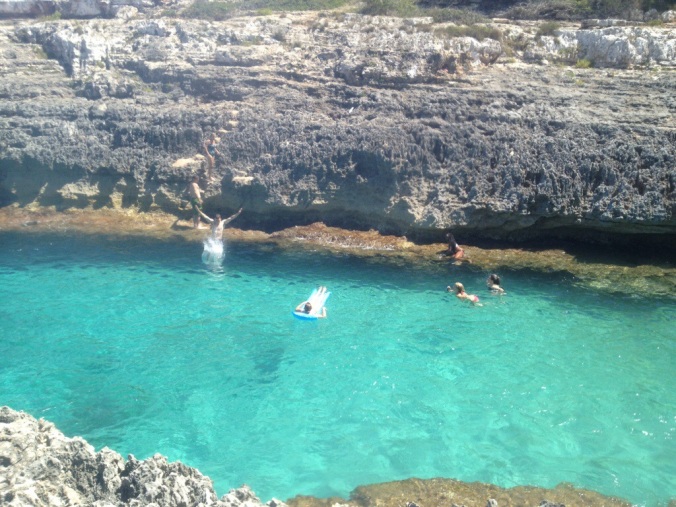 Well, that pretty takes me up to now. And even if it didn’t, I need to go meet my group for our group project, and, as usual, I’m behind schedule. So I won’t be proofreading this post until later; sorry if there are typos! I only have my iPad here, so it’s harder to catch mistakes than it is on a laptop.