If my Spanish was no bueno, have no fear. I start Spanish class tomorrow! I am excited to get lessons to help support the learning I get from being immersed in the language and culture. I am learning a few new words each day (this week I learned machista (male chauvinist) and zanahorias (carrots)), but I still take a lot of time to process, especially in noisy environments like at the grocery store or at the mall. I’m hoping some formalized practice will help.

Anyway, this will be another quick post. I have lots of work to do tonight, and I don’t want to procrastinate, but I wanted to take a few minutes and write about going zip lining this weekend!

As you know from my last post, I spent the day being lazy on Saturday. I did end up going to a new gringo/old gringo mashup party Saturday night, which was very fun, but aside from that, I mostly just watched a lot of TV. I didn’t want to be lazy again on Sunday, so I joined my friends in the rain forest going zip lining! We went to Braulio Carillo National Park, which wasn’t too far away (under an hour). The course had about 15 or so zip lines, of varying heights and lengths. The longest was the Superman line, which is 700 meters long. It was a great way to check out the rain forest! I didn’t bring my phone with me, for fear of dropping it, but a couple friends did have GoPros with them, so there is some footage. And here is some of it!

I started this post on August 11 but never finished it. It is now August 16, and I’ll pick up from here. I suppose I didn’t have much else to say about zip lining other than the fact that it was a really fun day. It was great to spend time with my new friends and get out of the city and into nature for a bit. Oh, and when we were done, we stopped at this AMAZING Argentinian restaurant for dinner. It was delicious. I can’t stop thinking the chimichurri! We ordered these big sharable plates, that were filled with delicious cheese, meats, and vegetables. Everything was topped with chimichurri (not to mention the amazing bread plate with even more chimichurri). It was by far my favorite meal since I have arrived here.

I was about to post some group pics, but I just realized that I never asked permission to do so. So, I will feel everyone out this week, and if people don’t mind being on the internet, I’ll start posting pics of actual human beings instead of just food. But for now, enjoy drooling over those veggies!

This week was pretty fun. As I said at the start of this post (which, at the time, was Tuesday), I had my first Spanish class on Wednesday. I was proud of myself because it was two full hours of speaking, listening, and writing only in Spanish, and I was able to keep up. I feel like it helped push me past my nerves because I still tend to get a little scared to interact in Spanish when I’m in public. The class was definitely a nice boost in confidence. I definitely have a lot to learn, but I am picking up more and more every day. I find it to be the most difficult when there are multiple people speaking Spanish at once. I am fine in a one-on-one convo, but if there’s a lot of background noise/talking, I struggle. I also still really rely on lip reading to help me out, so I’m still a little nervous to make phone calls en español. But I’ll get there!

Thursday was a late day at school (our contract requires that we stay late on Tuesdays and Thursdays), so I didn’t do much after that. My friends Bridget, Amanda, and I went for sushi, which was nice. I am learning that every time I find something that reminds me of home, I feel a little more comfortable here. I definitely want to embrace the tico culture, but sometimes it’s hard because it feels like nothing is ever what I expect it to be. Sometimes that can be draining. So I was a little nervous to have sushi because I didn’t know if it would be just like I imagine sushi to be. It ended up being just like I wanted it to be, so I was extremely happy about that. There was a little more rice on the rolls than I’m used to, so next time I will only order one roll instead of two. The good news is that the leftovers held up well, so I didn’t have to waste any of them (plus I got to use the sushi dish that some of my Biotechers completely legally gifted to me before I left, so that was handy).

I got a salmon roll and a hot tuna roll. Both were delish. Maybe next time I’ll try something a little more adventurous.

Friday was also a great day; I had dance lessons after school! It was really basic, which was perfect for me because I knew nothing! By the end of class, I knew three new steps (I think we were learning to salsa). I’m excited for next week’s class (it’s every Friday after school), where we will hopefully learn even more!

It was a big day for dance, because we already had plans to go tangoing Friday night as well. When we were at the Argentinian place (La Fonda) after zip lining, we learned that they have tango every Friday at 8:30. So a few of us headed back to that amazing establishment for some dancing (and chimichurri, of course). As it turns out, the dancing wasn’t as exciting as we had expected it to be. Basically it was people quietly eating in the restaurant, but this time there was a dude singing and playing guitar. The music was great, though, and we still did the tango. We were the only ones dancing, but whatevs. It was still fun.

Last night (Saturday), we had girls’ night out, which was also a good time. This time we went to a different part of San José, which is called Escalante. We went to the same restaurant we were at on the night of #FullMoonYoga. Again, the food was great, and so was the company!

Oh! I almost forgot! Before girls’ night, I headed into the San José City Central with Rebecca. I have been here almost a month, and I still hadn’t found my way downtown, so I was determined to do so! We found the National Theater (Teatro Nacional), a great park (Parque Central), and just a cool atmosphere in general. It was REALLY busy because it was Mother’s Day (LOL thanks for the text, LBJ), so sometimes it was hard to navigate the streets. We took a cab from the compound (which we have now started to call Gringolandia), and I was excited because I talked to the cab driver en español the whole time. His name was José, and he used to be a policeman. He showed us old pictures of himself in his uniform. He was very friendly.

We decided to be bold and take the bus back from city central (we are determined to figure out the bus system soon). It went…well…it went ok. As I have mentioned in multiple posts, there really aren’t street addresses here in Costa Rica (although thankfully there were street names and numbers downtown, so that was a big help). Rebecca had a map of the bus terminals, so we had a general idea of where to look, but we had a little trouble finding the terminal. Finally a tico stopped on the street and asked where we were going, and he helped us find it (everyone seriously is so friendly here!). We asked the driver if he went to our neighborhood, and he said he did.

the view from inside Teatro Nacional

This looks busy, but this wasn’t even the half of it! I guess everyone was out for Mother’s Day! 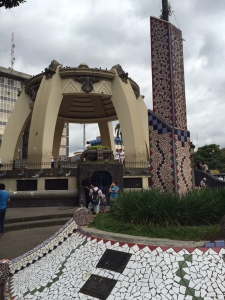 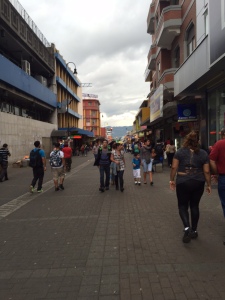 Just getting a feel for the streets of the city

As it turns out, there is more than one bus that goes through our part of town, and the one we were on wasn’t the one that stopped near Gringolandia. However, we were lucky because the driver asked us why we didn’t get off yet; apparently we had missed our stop. So we jumped off, not quite knowing where we were. Fortunately, though, we saw the soccer (or should I said, fútbol) stadium, which is next to the farmer’s market. Since we (sort of) knew the way home from the stadium, we headed in that direction. Then we were able to use Waze to help figure out the rest of the way. I was quite proud of us both because we were able to adjust the path that Waze was sending us (Waze is for driving only, and we found shortcuts for walking). It took us 20 minutes or so, but we eventually made it home safely to the compound, just in time for a little rest before ladies’ night.

That pretty much brings me to today. I didn’t do much today, aside from some grocery shopping and cooking. Now I’m headed to do a little schoolwork before bed, and tomorrow starts another full week at school! We have a rotating schedule, which means my schedule is different every day, and I’m excited because tomorrow I don’t have first period. Anyone who knows me knows that teaching during first period is the bane of my existence. I am really trying to be better about my bed time (I have been saying this for years), pero para mi, la lucha es real.

Ok, that’s about it for now. I will try to write again soon, but I don’t know if anything exciting will happen this week. I have things after school every day but no major plans otherwise. I hope all is well at home, or wherever you are reading this! ¡Pura vida!

Oh, and I found feta today. Life is good.