Tonight I went to my first Costa Rican fútbol game! I live walking distance from a fútbol stadium called Estadio Ricardo Saprissa Aymá (but everyone just calls it Saprissa Stadium (or Estadio Saprissa en español)). The stadium is the home of Deportivo Saprissa, otherwise known as El Monstruo Morado (The Purple Monster). The name is actually quite fitting, and I’ll tell you why in a bit. 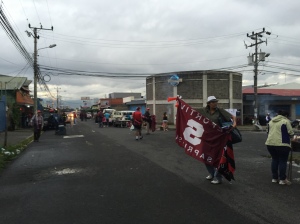 There were tons of vendors selling all sorts of Saprissa gear as we headed into the stadium. 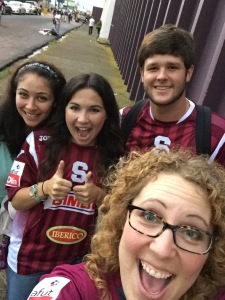 Here we are headed into the stadium, Saprissa jerseys and all! (Amanda, you are famous again!)

Instead of just narrating how the night went, I thought I’d try to do something similar to my last post, where I organize by theme rather than chronology. So, without further ado, here are some fun facts I learned tonight!

Coins and lipstick are contraband at Saprissa Stadium.

On our way to the stadium, my friend mentioned that we shouldn’t have any loose change with us because it is not allowed in. Evidently too many fans in the past threw their change, so now it is contraband.

I am still not sure why lipstick is banned. Well, actually all makeup is banned. I didn’t know this in advance, so I had a little pouch with my lipstick in my purse. When the security guards told me I could not bring it in, I was a bit worried. I don’t wear makeup every day or anything, but when I do, it’s good makeup, and I really didn’t want to have to throw out like five tubes of Mac lipstick and lip gloss. Fortunately, there was a guy there who was taking all the prohibited items and holding on to them until the end of the game. He said he can take it and hold it, and then after the game I can pay him one mil (slang for one thousand colones (about $2)) to get it back. Not gonna lie; I was nervous about just giving my stuff to this dude, but what choice did I have? If I didn’t give it to him, I’d have to throw it out anyway.

As it turns out, it was pretty easy (albeit totally overwhelming) to get my stuff back. As soon as we walked out of the stadium after the game, there was this huge crowd of people screaming and grabbing and shining their phone flashlights. I figured that must be where I could find the man, and I was right. It was really loud, crowded, and chaotic, but I was able to find my pouch, which he kept safe during the game. I can only imagine how much money that man made tonight. Very clever indeed.

But really, does anyone have any ideas about why makeup is dangerous at a soccer game?

But apparently flares are perfectly fine.

I don’t know if someone snuck it in or if flares aren’t considered as dangerous as the lip gloss or what, but toward the end of the game, we saw a huge flare just randomly light up in the middle of the crowd. I’m still wondering if anyone got burned, and if not, how is that possible.

Here, I’ll just share a photo, and you can be the judge of whether this is as frightening as it looks. 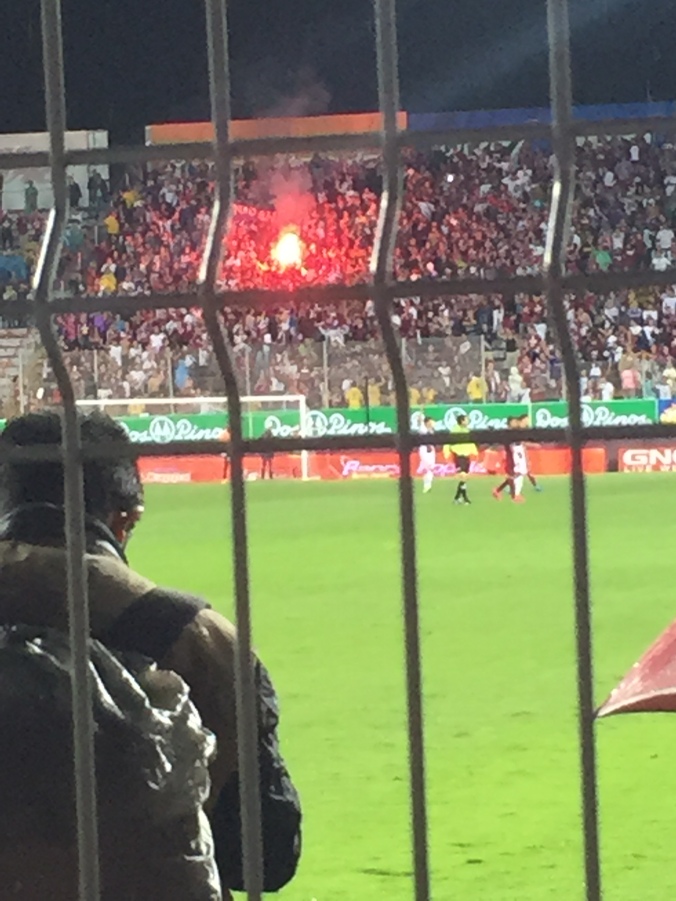 Notice that it’s in the middle of like a thousand people. Is it just me or is this insane? Also am I the only one thinking that the umbrella in the foreground looks like the beak of a giant bird who is about to attack the guy on the left??

Sexism can come in handy sometimes.

I don’t know why, but it is hecka cheap for women to buy tickets to the game. If we had sat in the regular seats (more on our seats later), we would have had to pay the same as anyone. However, in our section, women paid half the price as men. Since it was the cheap section already, this means I paid 3mil for my ticket (a little under $6). Not bad, not bad!

The cheap seats are fun.

So there are a couple different types of seats at Saprissa Stadium. We went for the cheap tickets (right behind one of the goals) not really knowing the difference, and I’m glad we did! The pricier ones (about $25 each, regardless of gender) had certain amenities like a roof and actual individual chairs. This is different from our section, which was exposed to the elements (and yes, it rained) and basically just had concrete bleachers with numbers painted on them. Technically speaking, we had assigned seats, but when we asked someone how to find them, she pretty much just laughed in our face. For all intents and purposes, it was general admission, and we were told to just sit wherever. We were able to find a few open seats right up front. It was a little hard to see at times, but overall it was really fun and a great experience.

The crowd was great. I should mention that Saprissa was playing a pretty big rival, and the fans really are FANS. Luckily, pretty much every single person in the stadium was wearing team jerseys, so it was easy to see who was cheering for which team. But everyone was all mixed up, so no matter what happened in the game, people were cheering or booing all around us (more on the sounds of the game in a moment). I definitely recognized some choice words en español, which made me chuckle. I guess there’s just something about sports that makes men and women love to swear in any language.

When we first sat down, I was pretty overwhelmed by how loud and crazy it was (especially when La Liga scored and Saprissa fans actually jumped out of their seats and started climbing the fence between the fans and the field), but as the game went on, I found it to be more and more fun. In fact, I ended up getting really caught up in the game, which is rare for me (usually I go to live sporting events for the food). I wanted to post a video of the crowd, which I was sure I took, but I just went to get it from my phone, and it apparently does not exist. I do, however, have some really bad 2-second videos of me putting my phone in my pocket, so I am fairly certain I did that thing where I pressed start at what I thought was the end of my recording. Oh well, maybe next time! 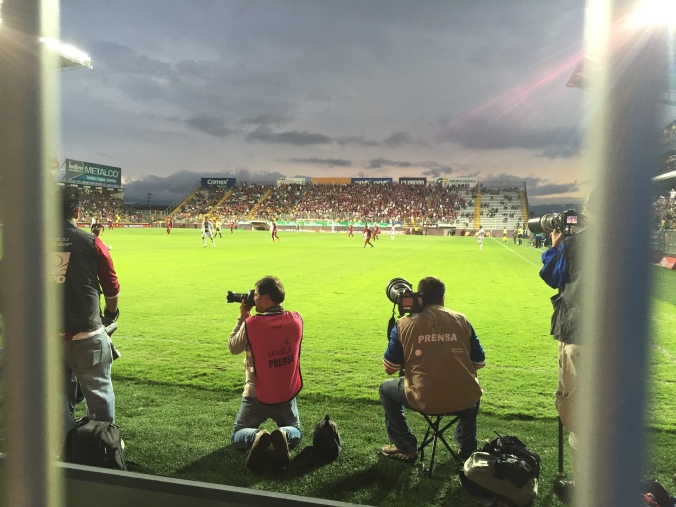 I was pretty proud of this shot. I feel like it’s so artsy! 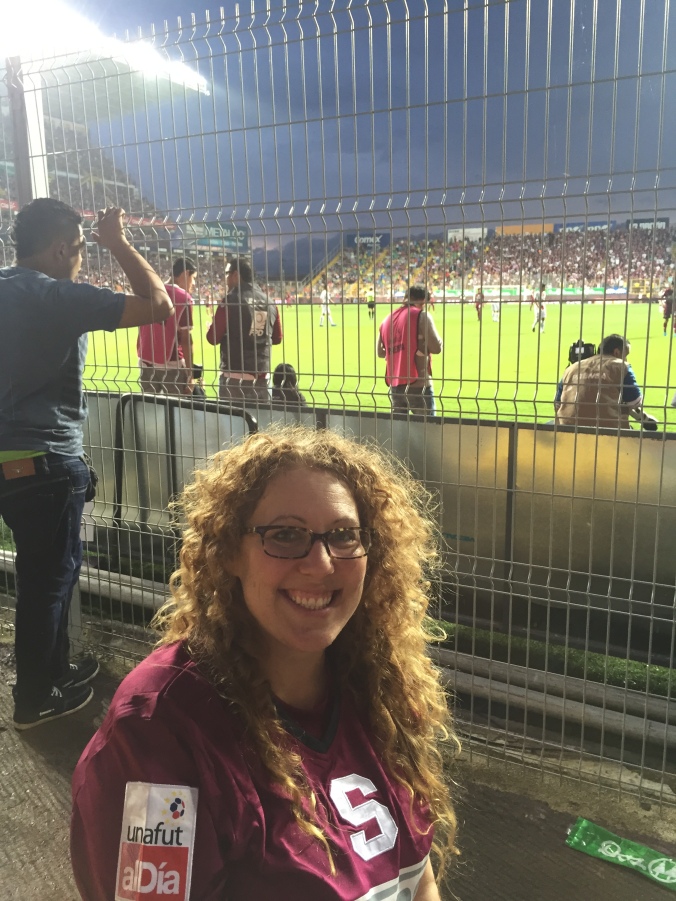 No game is complete without a home-team jersey!

It’s probably a good thing they don’t sell beer at the stadium.

You read that right. They don’t sell alcohol at the stadium. Which, if you read the last section of this post, is probably a good thing. The fans are so unbelievably passionate as it is. I definitely think alcohol might get people even more wound up. And before you go and get all, “but that’s half the fun of going to a game” on me, let me tell you that it’s plenty fun and exciting without it.

It’s cool when everyone kind of just knows what to do.

My favorite part of the excursion was the way the crowd cheered together. Like, if Saprissa missed a shot, 20,000 people went “OOOHHH” all at the same time. Or if there was a corner kick, 20,000 people started whistling at the same time. I mean, I know that we have our chants and cheers at home, but this felt different. At home, a few people start, and eventually it builds until everyone is doing it. But here, it was almost like the whole stadium was one organism. It wasn’t mimicry; everyone just knew. It was perfectly in sync, as if it were planned. I really liked it because I thought it gave really cool insight into the importance of fútbol as part of the national culture.

This also brings me back to the whole Monstruo Morado thing. According to my favorite credible site wikipedia,

One of the most popular nicknames for the team El Monstruo Morado (The Purple Monster) can be traced back to 1987, when the Costa Rican newspaper Diario Extra gave the team the nickname during a derby, because of the club’s enormous following. A reporter commented that the sea of fans in the stands at the Estadio Ricardo Saprissa Aymá in Tibás wearing purple, and the tremendous noise they were generating, made him feel like he was “in the presence of a thousand headed monster”. Saprissa immediately adopted the nickname El Monstruo Morado.

When I read that after the game tonight, I was just like YES. That’s exactly what it felt like! I dunno, it was just really cool.

So on the opposite side of the stadium (behind the other goal, where the flare went off), there was a band. A loud, nonstop, energetic, awesome band. Kind of like a marching band but without the marching. Basically they played the entire time (literally), and I feel like so much energy was brought to the stadium because of this band. The drums in particular were awesome. It almost felt like a heartbeat or something, or like the score to a movie. (I feel like LBJ is going to be so proud of me for my amazing music analysis skills here.) There was a steady drumbeat for the whole game, and every time I looked over to that side of the stadium, the fans were dancing like crazy. Don’t get me wrong, our side was pretty intense, as I’ve mentioned, but this was different. There was legit nonstop dancing across the way (even through the whole flare incident), and it was so fun to watch.

Ok, I think that’s about all I can think of, and anyway, I just noticed that this post is over 1,600 palabras. Plus, I’ve got work tomorrow. Entonces, buenas noches, y gracias por leyendo!