Guess what? I drove this weekend! If memory serves, it was my first time driving in a country other than the USA!

(Side note: Did you know it’s rude to call the United States “America”? Every country in North, Central, and South America is part of “America.” So, if you live in the States and someone asks you where you are from, you should say you are from the United States (or just the States) rather than America. There is your cultural competency lesson of the day.)

I’m gonna be honest; I was terrified to drive in Costa Rica. From what I read about accidents in San Jose and the winding, dirt mountain roads in the rest of the country, I didn’t think I could do it. And not for nothing, but I really like not owning a car. Never mind the huge cost (especially here, where gas and the cars themselves are way more expensive than in the States), but it’s just kind of nice to be forced to do a lot of walking (though sometimes I cheat and take taxis, which are pretty cheap for short rides). The roads by me are pretty busy, and the motos scare the bejezus out of me since they apparently are not governed by any sort of traffic rules or safety guidelines whatsoever.

So, in general, I am quite content with a life sans wheels.

But still, sometimes it would be nice to have the freedom of the open road. Well, at least as open as it will get in Costa Rica. It is for that reason that I decided to rent a car and get a little practice this weekend! (Plus, my mom is coming to visit in a couple of weeks (yay!), and I didn’t want that to be the first time I rent a car here). I had a party to go to this weekend, which was about an hour away, so I figured I may as well drive myself and some friends there. If you are reading this, you probably know by now that I tend to overthink things, especially when they are new, so of course I got myself worked up over the whole thing. But, as I am wont to do, I forced myself to just get over my fear and do it, and, as is wont to happen when I force myself to do things, it ended up being a great experience!

The adventure started after school on Friday. My friend Rebecca was kind and brave enough to come with me so I didn’t have to go alone. We took the bus into Central and then walked from the bus stop to the Thrifty car dealership (I had a great experience with them; I recommend!). The man at the counter was super nice, and even though he spoke English, he kept the Spanish going so I could practice. He was really patient (as most people here are) and spoke slowly to help me understand. There was one time I asked for English because he was talking about the insurance, and I didn’t want to misunderstand. For the rest of it, I spoke and listened all in Spanish. It was great practice, and I was excited that I was able to say more than “Hi how are you? Good thank you. It’s raining. Where is the bathroom?”. Renting a car en español feels like a pretty practical life skill to have under my belt. 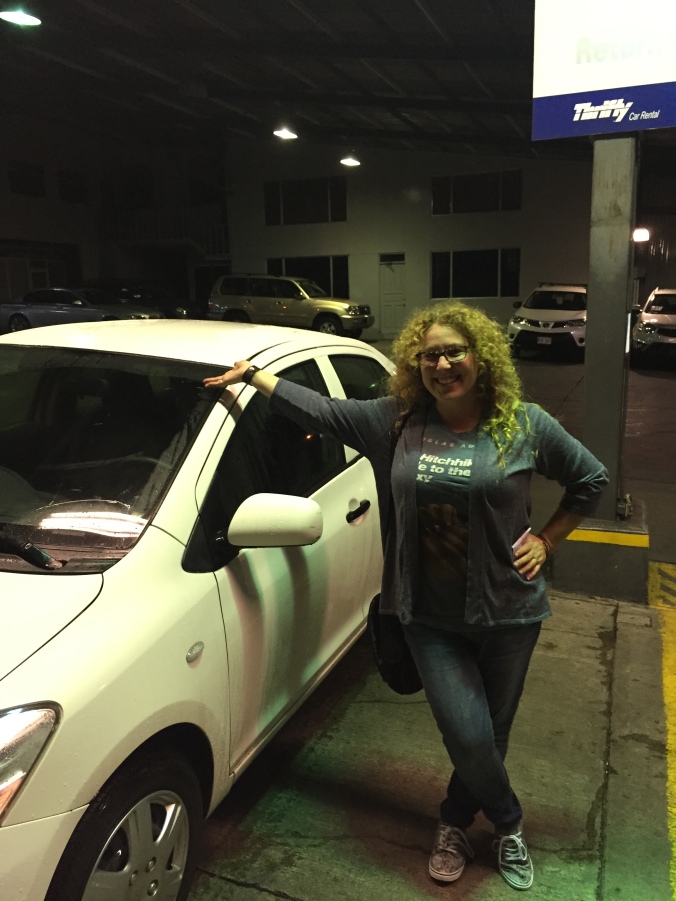 Here I am feeling excited to pull this lovely little Yaris out of the rent-a-car place. And yes, I’m wearing a book cover t-shirt and my Vans because MY LUGGAGE ARRIVED!!! (Thank you, Mom, Mark, James Brown, and Ana, plus everyone else who had to listen to me talk about TGLF2k15 for two months!)

To get a little practice in the streets of San Jose, Rebecca and I drove to WalMart and did some shopping, and then we drove to one of our favorite sodas. From there, we went home. I didn’t want to go too crazy driving all over the place because it was dark, and that was still a little scary for me (by the way have I ever mentioned that it gets dark here at like 6:30 all the time? It always feels so late!).

Here she is! What a beaut!

On Saturday, I decided to drive to the market. Usually I walk, but I figured I may as well make use of the car and see what it’d be like to drive around Tibas a bit. The market is right next to Saprissa Stadium, which you know about from my last post. I was actually really glad that I drove because I have still been having trouble visualizing each part of town in relation to each other (yes, I know it’s been two months (literally two months as of today, actualmente!), but I struggle with these things). I get turned around because the roads aren’t straight. Por ejemplo, to go to the stadium, I make a right out of my apartment. But depending on how I come home, I can end up coming back from the left! It’s all very confusing, but making the full drive by myself really helped me visualize the lay of the land.

Just a quick shot of the feria I took on Sabado. It was a beautiful morning, and I loved stopping at a soda for some gallo pinto y cafe negro. ¿Como se dice “yum”? Also, puffy clouds!

The reason I had to go to the market was to buy ingredients for guacamole and salsa (which I guess I should call pico de gallo because here, salsa means sauce) for the party. So, I came home, made those (with the help of Bridget), survived a monsoon (long story for another time), and hit the road! Since no post is complete without some food pictures, here are the fruits (haha, literally) of our labor!

Ahhh look how distracted I get by food! Back to the driving!

After the vaguely-alluded-to monsoon, we headed out to the party, which was a little while past Cartago (more on Cartago later). There were five of us in the car, which was fun. I was super nervous at first, but everyone was really calm, and no one seemed to think I was a crazy driver (or if they did, they hid it well!). Eventually we got more and more frustrated with Waze, which was apparently on a mission to make sure I got to drive on every single kind of terrain possible. It sent us through the narrowest, rockiest, dustiest, muddiest, crowdedest, potholiest, remotest, blocked-by-constructionest streets there were! The good news is that I really did get a ton of great practice, and now I’m really not nervous to drive here at all. The bad news is that it took us twice as long as it should have to get to the party. But hey, pura vida and all that. All was well.

Don’t worry, I was not driving when we took this, I swear!

We were supposed to make a right up here, but we couldn’t because these trucks were totally stuck in the mud! Luckily we saw another route on the map and were able to get around it. Otherwise we would have just sat there for like an hour.

Photocredz for this one and the last one go to Tracey!

Also, I actually felt carsick WHILE driving. That was a first! That might help you imagine how crazy the roads were.

The way home today was MUCH easier. I think the fact that it was sunny really helped; driving in the rain yesterday felt like it made everything go a little (or a lot) slower. This morning, we stopped at Cartago (see, told ya I’d get to Cartago) for desayuno and to see the basilica. It was a beautiful city – a great pitstop indeed! And if you’d like a fun fact, wikipedia would like to inform you that Cartago was once the capital of Costa Rica (1574-1824)!

The basilica is pretty famous, actually. Every year on August 2, there is this huge pilgrimage to visit it. It’s the feast day of the Virgin of the Angels, and millions of pilgrims come to honor Costa Rica’s patron saint, La Negrita. The basilica itself is stunning, although we weren’t able to see La Negrita because there was a service going on. However, for your learning pleasure, you can read more about it here. 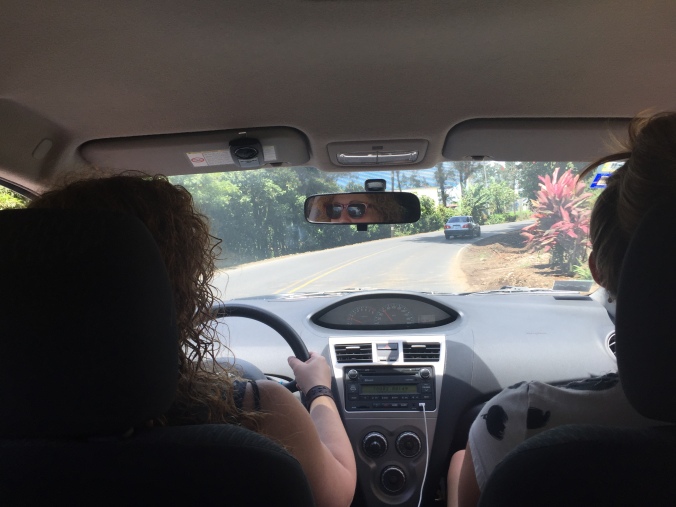 Thanks to Rebecca for taking some on-the-road pics with my phone! Check out that gorgeous blue sky! 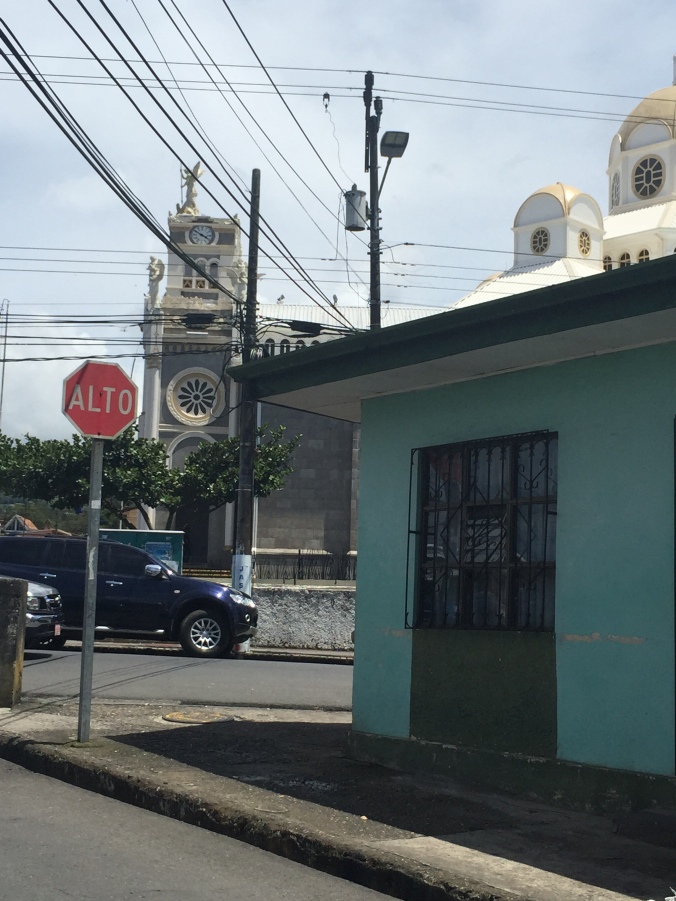 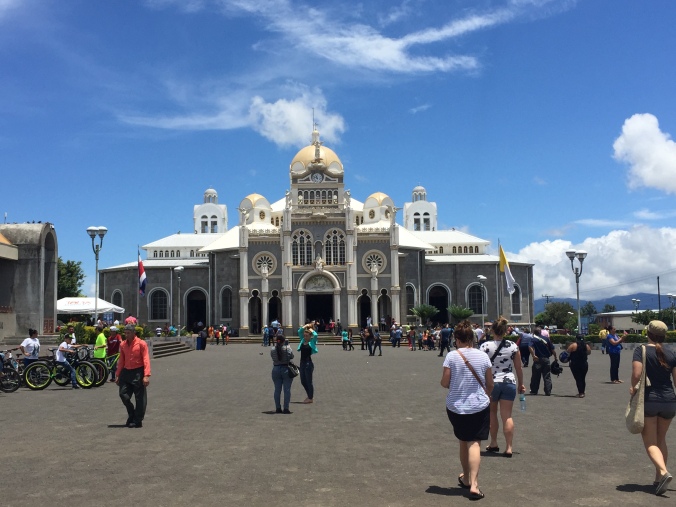 I have yet to tire of the gorgeous views everywhere I go. This is the view from the basilica.

I took one last pic before getting back in the car. So pretty!

Once we were back at Gringolandia, everyone went their separate ways to do some relaxing. I decided to return the car by myself just to put myself in one more uncomfortable situation. As is my process, I was nervous about every little thing, and every little thing went just fine. My friend Chelsea was kind enough to teach me how to ask for a full tank of gas (lleno), and off I went! Fortunately, the attendants pump gas here, just like in New Jersey (where we pump fists, not gas), so I didn’t have to do that on my own (people think it’s weird that I don’t really know how to pump gas). I did fine at the station, despite the fact that I pulled up on the wrong side (but the gas tube thing was hecka long, so it worked out fine). From there, I turned on Waze and headed back to Thrifty, which actually was super easy to get to. I missed one turn, but it was an easy circle back to where I needed to be. 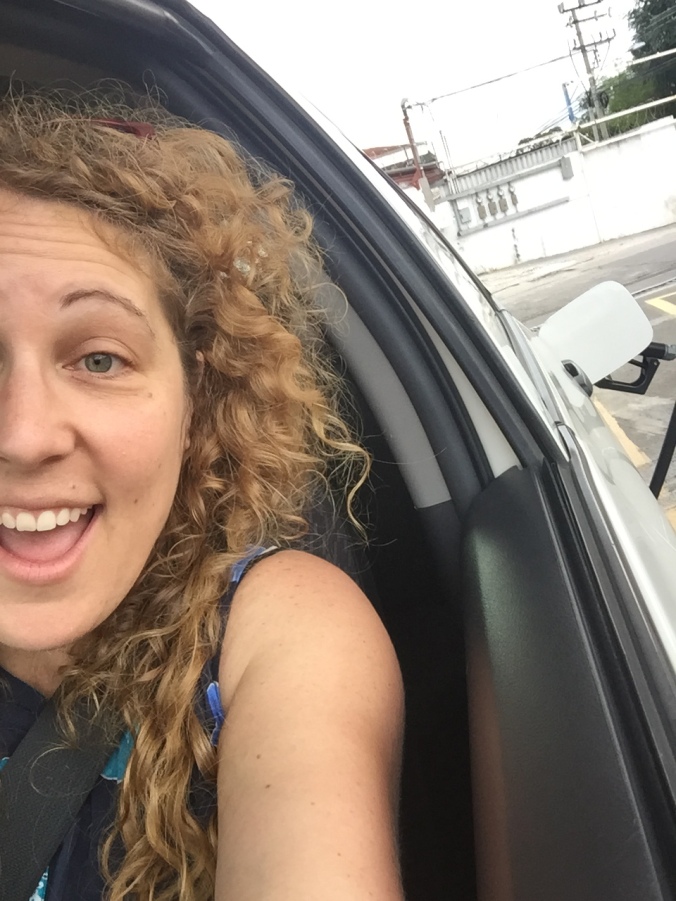 Note the gas pump in the tank. I was very excited to be filling up. And yes I know I’m the biggest dork ever.

When they inspected the car, I was sweating so much. (If you haven’t noticed yet, when I say I was sweating it means that I was really nervous. Just clarifying for those of you who aren’t long-time readers from last year’s posts about Spain.) The guy looked at everything so closely, as if he were sure here was going to find something terrible on the car. But huzzah! He could find nothing, and he nodded when I asked ¿todo bien?. I once again spoke in español as I paid, and that was that. Fue muy fácil. From Thrifty, I walked to the bus stop (again, I was sweating because it was my first time in Central by myself and I got a little lost, but I put on my best I-totally-know-where-I’m-going-that-is-not-a-map-open-on-my-phone face and found it eventually).

The rest of the story is pretty boring (unlike the nail-biting, edge-of-your-seat thriller this has been thus far), so I think I’ll end it here. Thanks for reading long enough to indulge my notion that driving in a city is exciting enough to write 1,800 words about! ¡Hasta luego!

2 thoughts on “The open road…sort of”