And WordPress wasn’t hesitant to remind me, either. When I logged on and saw that there is now a graph telling me exactly how much I’ve been slacking, I was just like OH COME ON, WORDPRESS! Thanks for making me feel guilty! Some upgrade!

I AM SO MAD RIGHT NOW I JUST HAD SO MUCH WRITTEN AND I ACCIDENTALLY CLOSED THE TAB AND IT ERASED EVERYTHING EXCEPT THIS STUPID PART UGGHHHHHHHHH I SHOULD HAVE KNOWN BETTER AND SAVED MY WORK!!!

So, this past Monday was Culture Day in Costa Rica. Culture Day is basically like Columbus Day only less racist. The holiday is meant to celebrate the different cultures that have made up the history of Costa Rica, but en realidad, it mostly just seems like a nice excuse to have a day off from work. When I was looking at the calendar a few weeks ago and noticed the long weekend, I texted my mom and suggested that she come visit (flights were pretty cheap this weekend). Within hours she had a flight booked, and the countdown began!

I was extremely excited when mom arrived on Thursday. It was so great to see her! I haven’t been too homesick since I moved, though I do get the occasional pang. Seeing my mom (and getting the rest of my stuff that was left behind in #GBF2k15) was a great way to feel like I am home. We hung around locally on Friday (I had to work, and I wanted her to see some of my favorite places here), which was fun. I won’t bore you with the details about the herb garden we planted or anything, but I will share a couple pics.

I got to show Mom the not-so-exciting city of San Jose. This is us in front of the National Theater, which we found after fighting our way through huge crowds of tons of people. It was loud and overwhelming.

My new garden. Hopefully I can keep the cilantro alive since it’s such great weather here. At home I always killed it!

On Saturday, we got up and began our journey to the beach (a quiet little beach town called  Playa Sámara). It was a rather long journey (about five hours) because Playa Sámara is in Guanacaste. We rented a car (good thing I practiced a few weeks ago!), which of course was an adventure in itself. The roads this time were much better than the last time I drove, but there were still some mini adventures, like driving through streams and past signs with some colorful language to those people who just dumped their trash on some guy’s property.

We arrived with pretty perfect timing, as check-in was at 3, and we got to our condo at like 3:15 or something.

Side note: I was extremely excited to use airbnb for the first time on this trip. If you are ever in Sámara, you should stay here. I highly recommend!

Our landlord (does it count as a landlord if it’s only for a weekend?) checked us in pretty quickly, and once that was done, we got some down time and then headed to the beach. It was a pretty perfect sunset, and being there was just so relaxing. It’s not that I’m overly stressed or anything, but you know how it is. When you work every day and live in the city, there’s just something about being around nature that makes everything seem so much more chill. We walked along the beach, watched the sunset, and frolicked a bit before heading back into town for dinner.

Clearly I was enjoying myself. Props to my mom for totally mastering the iPhone photo burst feature.

Reunited and it feels so good!

There’s just something about sunsets.

After our walk, we went to dinner at a great place recommended by our landlord Darcy. I ended up having what quickly became my second-favorite meal since I arrived in Costa Rica (second only to the Argentinian place I still can’t stop thinking about). The food was delish, and the company was great (my friends Michelle and Rebecca were also there, as well as Darcy). It was the perfect end to a great day.

chicken kebabs with the best seasoning ever. pretty sure the sauce in the little cup was chimichurri

On Sunday, Mom and I got our cardio by hoofing it to the zip lining place (which we actually never found), but as it turns out, they don’t do zip lining on Sundays. So, we headed back to the condo and got ready for the beach (it was still nice and early). We spent a few hours sitting on the sand, swimming in the sea, and just generally relaxing. It was quite perfect, to be honest.

The road from town to the beach. I loved that everything was so close! 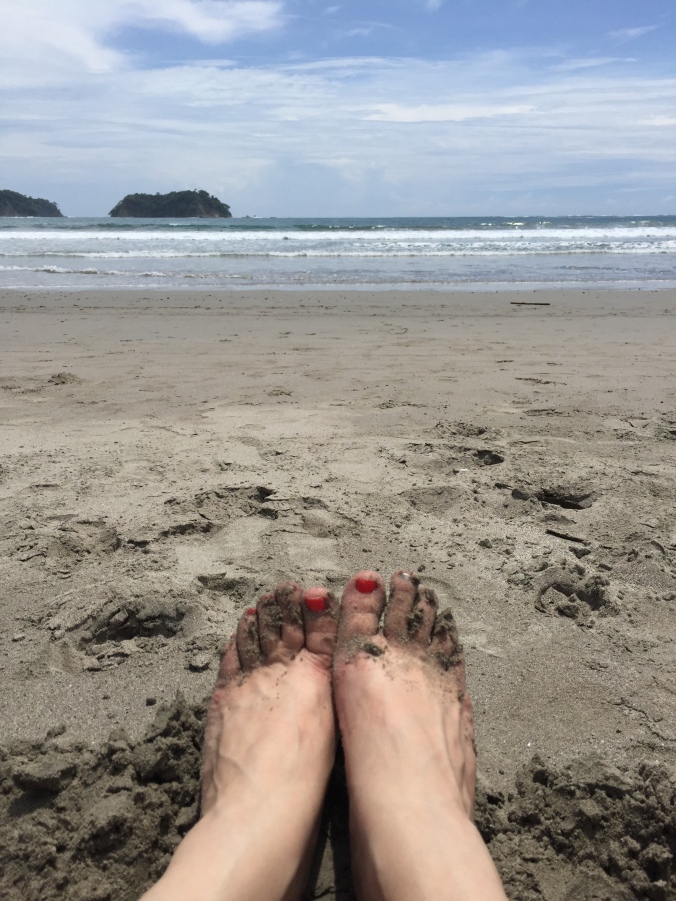 My favorite part about Sámara was that it was so quiet, even though it was a holiday weekend. It never got crazy crowded, and I quite enjoyed that.

Once we had had enough fun and sun, we headed to lunch at a taqueria I had read about in Lonely Planet. The book said the grilled avocado was worth the money, so I had to find out for myself! (It was.) The restaurant is right on the beach, so we had a great view of the water as we ate. Eventually we saw the clouds start rolling in, so we headed back to the condo. That was pretty much it for Sunday because it ended up raining for the rest of the night. We didn’t mind, though, because we were totally fine with quiet time spent napping, chatting, and getting some grading done.

I mean really though. This doesn’t even need words. 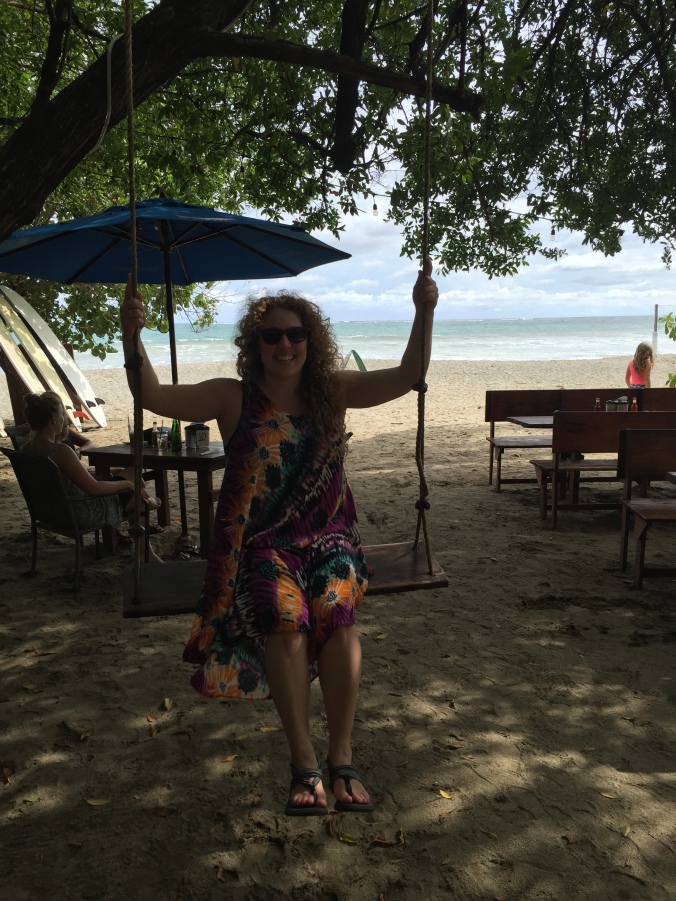 Spending some time on the swing while waiting for our food. 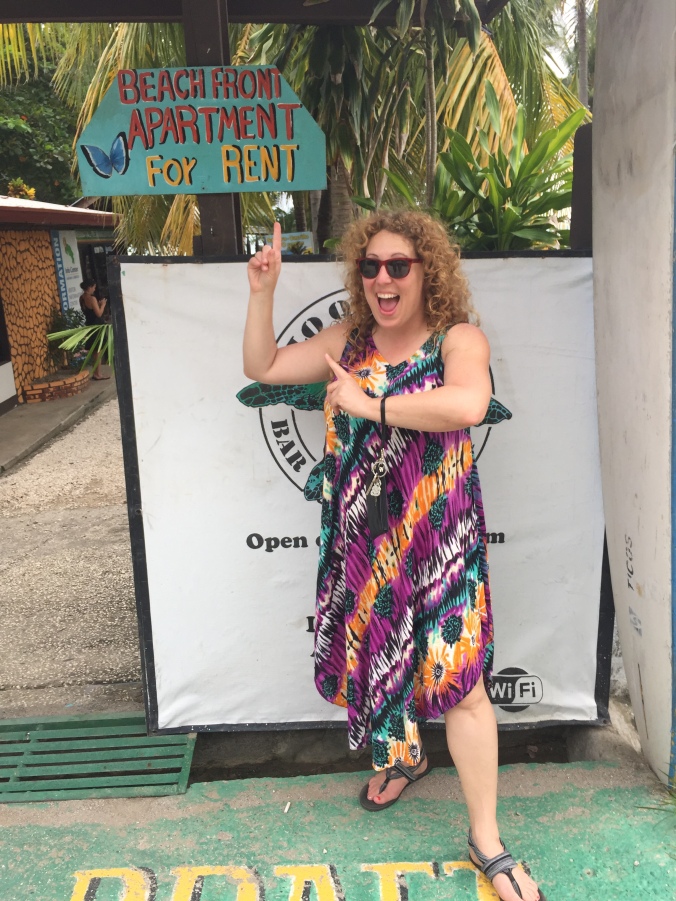 I’m thinking of moving to the beach!

We had to head back to San Jose on Monday, but not before we went to an island! We booked a kayak tour and paddled out to this cool island off the coast of Sámara. I think it was the first time ocean kayaking for all of us. I was thankful we went out in pairs because I think I would have cried if I had to paddle alone. The three-hour tour (that sounds so ominous, doesn’t it?) included the kayak to and from the island, snorkeling, and chilling with some local wildlife. It was yet another awesome experience. Is it mean that I took a little bit of pleasure that I knew my MCVSD friends were home having a staff day when I was standing on an island watching iguanas and staring at this amazing view? 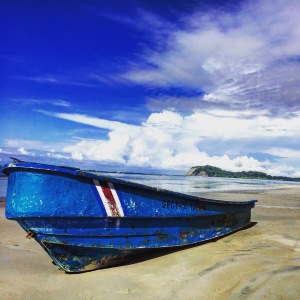 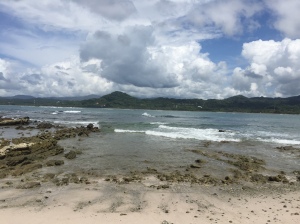 Sorry, I’m too lazy and tired to caption and enlarge all the photos. I will say, though, that I wanted to pet that raccoon so badly. For some weird reason, it made me really miss my cats.

After our kayak tour, we got changed and headed home. I’d love to write more about our five-hour journey home, but I’m going to bed, so this is all you get. Thanks, as always, for reading, and I hope my next post is not too far away!

One thought on “Sámara with my Mámara (sorry, worst pun ever!)”