I am writing this from my Spanish school, Ixchel Spanish School. We’ve only been here a few days, but it’s been fun!

Our mornings are filled with Spanish class, which is mostly conversation and then some review of past concepts. I am hoping that we move forward to some more advanced stuff this coming week, but I’m still pleased so far. The conversation practice is much needed, and my teacher makes great corrections that are helping me fix lots of details.

In the afternoons we have been grabbing lunch, either at the school or out somewhere in town, and then usually napping. You wouldn’t believe how exhausting it can be to speak four hours of Spanish in a row!

In the evenings we have been knocking out the restaurants on the TripAdvisor top ten list of restaurants in Antigua. Everything has been delicious, and we have met some fun people as well!

Yesterday was Saturday, and we booked a tour to see Volcán Pacaya and the Kawilal Hot Springs. It was a great day! Our intention was to hike the volcano, but we ended up horseback riding instead. It was a beautiful day with great miradores to enjoy!

Rather than babble on and on, I’ll give you a photo tour for the rest of this post! 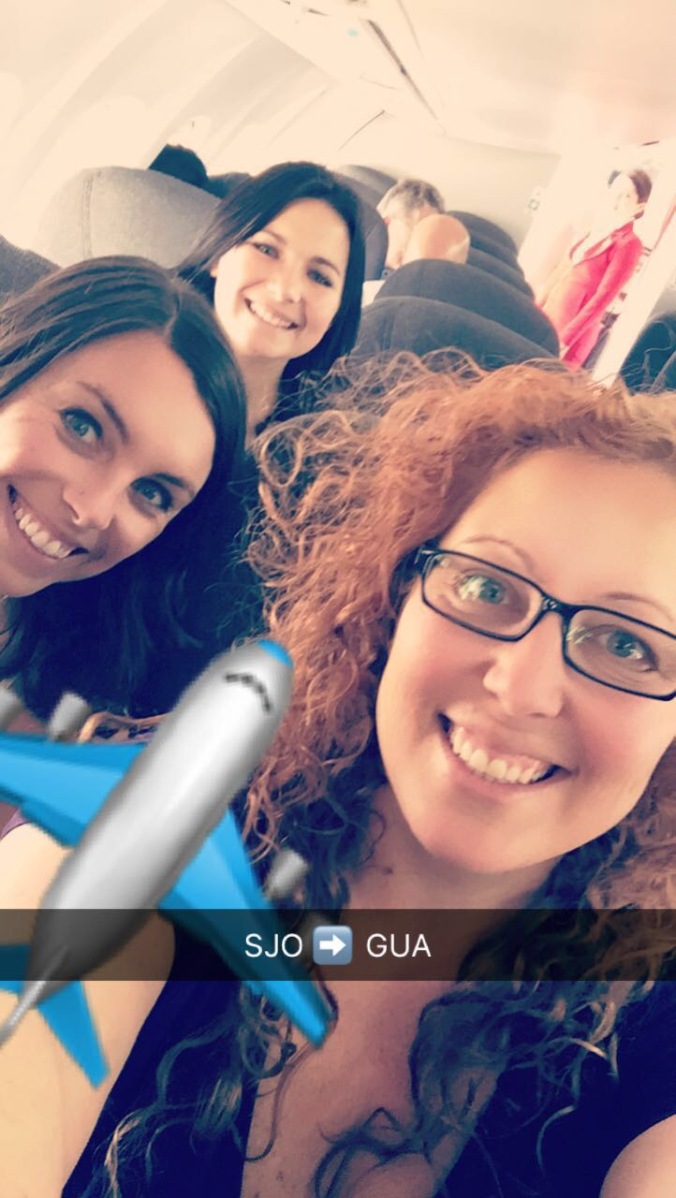 Chelsea, Amanda, and I on the plane. We got really lucky because many flights were grounded in SJO because of the ash from Volcán Turrialba’s recent eruption. We had a delay but took off just in time! 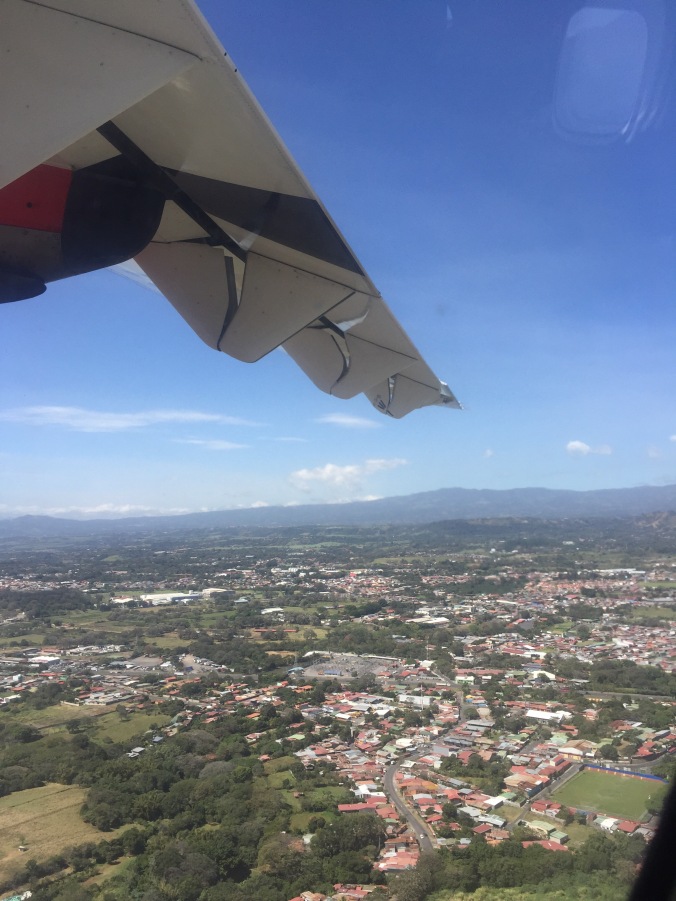 Views from the plane. It’s a beautiful country with lots of mountains!

This arch is pretty much a centerpiece of the city. I love the view of the volcano! You can pretty much see mountains and volcanoes from anywhere you stand in the city. 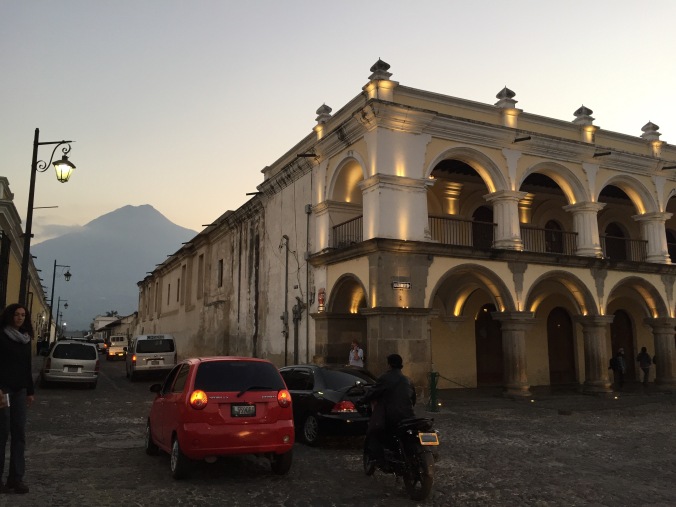 The streets in Antigua are gorgeous, filled with cobblestones and old (hence the name Antigua) buildings. I love how there are no skyscrapers, and everything feels so small and quaint. 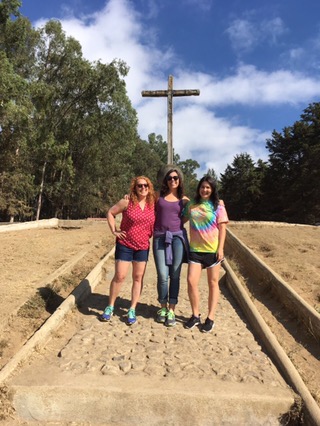 On day 2 of class, our teachers took us for a walk up Cerro de la Cruz (Hill of the Cross). It was fun to walk and talk, taking in the sights while still getting lots of Spanish practice! It’s a relatively easy walk that led us to some great views of Antigua! 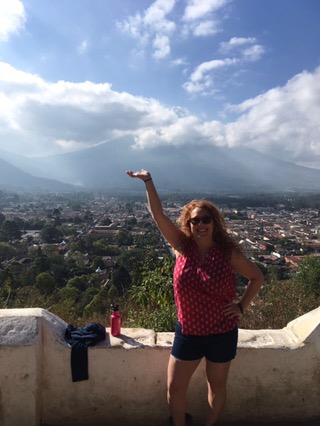 It wouldn’t be a vacation without my dorky pose! 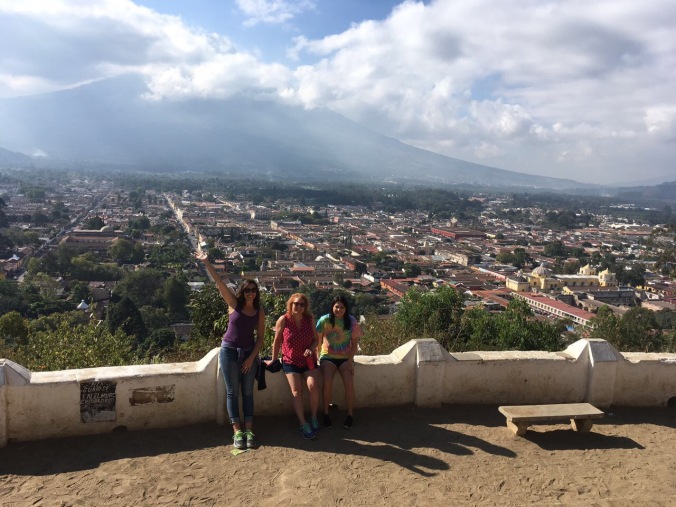 This is the view from the roof of the school, which is where I have my class. Not a bad place to learn!

One of the TripAdvisor top ten places is called Sky Cafe, and it is known for being the perfect location to catch the sun set over the volcano. It was a bit too hazy for us to see much of the volcano, but it was still quite the thing to watch!

My view from the horse. The man guiding the horse is Alberto, and he was very nice!

Just your normal Saturday…three girls and their horses 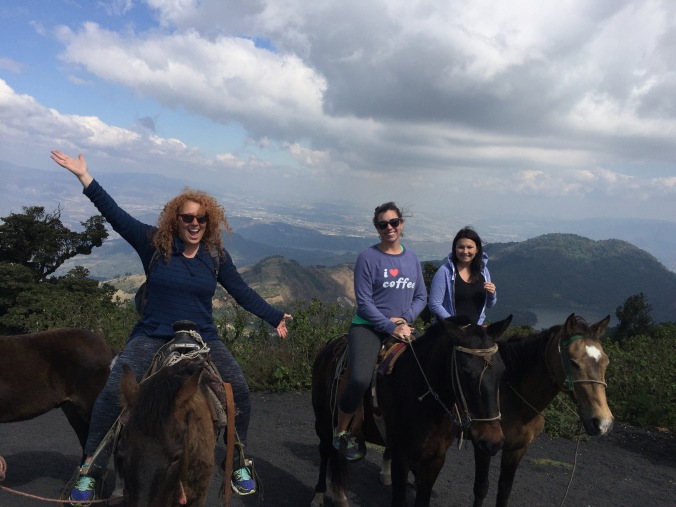 Again with my dorky pose. Oh well, I is what I is.

Here you can see the smoke seeping out of the cone.

Here’s Alberto again. I was trying to get a pic of Pod & Chelsea, who were up ahead, but we fell behind. Even en caballo I’m the last one to finish!

Here I wanted to give an idea of how massive the lava pit (not the technical term I don’t think) was. It was cool to walk around the whole thing!

You can kind of get a sense of scale here. The little hut beneath the Guatemalan flag is the Lava Store, where they sell fair trade jewelry made out of coconuts and lava. The store was featured on National Geographic for being one of the weirdest locations to have a store. And yes, of course I bought a necklace!

If I remember correctly, this is the lava from the 2014 eruption (or possibly 2010 but I really think 2014). The guide said there used to be trees all over this part of the volcano, but the eruption wiped them all out. Only one person died in the eruption, and that was a photographer who was taking pics of it while it happened.

Pod and Chelsea roasted marshmallows by the heat inside the earth! I didn’t feel like doing it, but it was fun to watch! They came out a perfect toasty brown (but tasted a bit like a volcano).

The stuff off to the right is just clouds, but you can still see smoke coming out of the volcano. It is an active volcano that continuously emits smoke (this is a good thing because if it didn’t, the eruptions would build and build inside the volcano, leading to bigger eruptions) 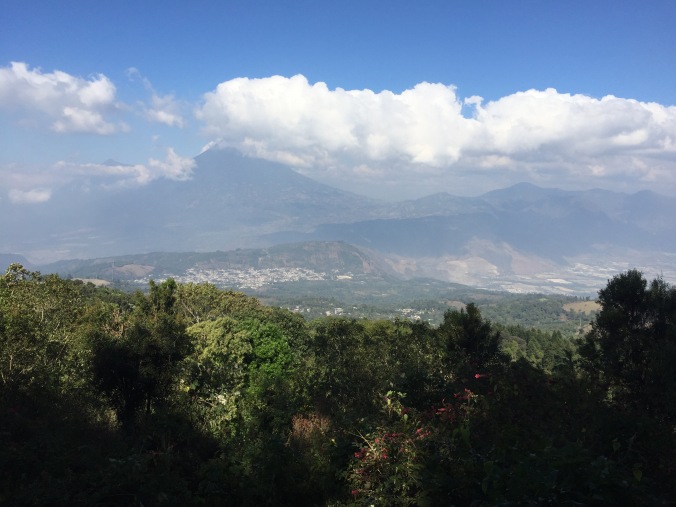 Nice view of the valley

There is a laguna in the distance, but it’s hard to see in the pic. 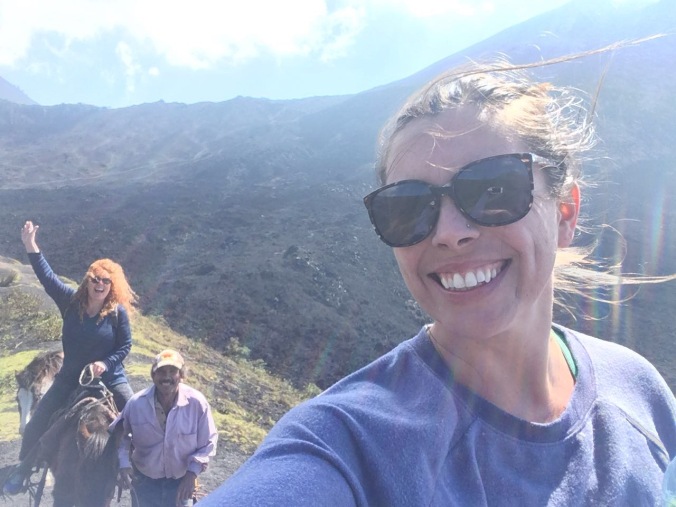 Selfies or it didn’t happen

Well, that’s about all I have to say today! I don’t have pics from the hot springs because we were in bathing suits soaking in hot and cold tubs and that would be weird to post! But trust me, it was rico!

I hope to do one more Guate post after we go to Lake Atitlan next week. We’ll see if that actually happens!

Thanks for stopping by! ¡Hasta luego!

One thought on “Guat a Week! (Pun Intended)”